The Word mag has an, as ever, interesting article in the new one about performing live:

Fun little interview with EC. Will quote some stuff when I get time and energy...
There's more to life than books, you know, but not much more
Top

Well scanned. Hope people can read that happily.
There's more to life than books, you know, but not much more
Top

Hope people can read that happily.

So the opening lines of Dirty Rotten Shame were taken from a Bill Monroe monologue? Interesting...
Top

Found this out there on "Addicted to Noise"

The songs on "All This Useless Beauty" are tunes Elvis had written for other musicians, some of which had never been recorded before, and he relayed memories about the creation of these tunes. "Complicated Shadows": "I wrote this song for Johnny Cash. I could see him acting like Judge Dredd singing it." "Dirty Rotten Shame" (which didn't make it to the album): "I wrote this song after seeing Bill Monroe perform. Towards the end of the performance, he said 'I remember the good ol' days,' and a hush fell over the audience, waiting to hear about the good ol' days. Then he said, 'they're gone.' " "Little Atoms": "I was in Germany recently, and I was being interviewed by one of those typical German journalists: trench coat, steel rim glasses, body of Uma Thurman, the voice of Laurence Olivier. He said to me (Elvis using German accent) 'You are trying to destroy pop music like Wagner tried to destroy symphonic music.' He also said, `This song contains the German National Anthem.' They look for these things. Watch out, we could all end up singing it."

It's taken a while but THE CURSE OF COSTELLO strikes agin! 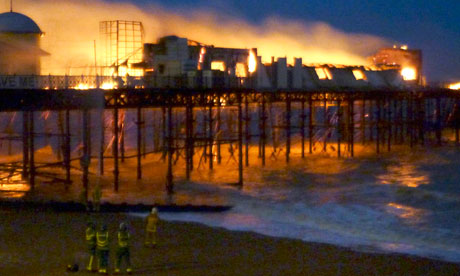 Two teenagers arrested after a suspected arson attack on Hastings pier have been released on bail, Sussex police said today.

The fire in the early hours of yesterday destroyed 95% of the buildings on the Victorian pier, which has been closed since 2006.

Two men, aged 18 and 19 respectively, were detained shortly after the incident. They have been bailed until 2 November. Police are appealing for anyone with information about the cause of the blaze to come forward.

One fire crew remains at the scene, damping down, an East Sussex fire and rescue service spokesman said today. At the height of the fire, 50 firefighters and two RNLI lifeboat crews battled to save the Grade II-listed pier, which opened in 1872. Dozens of amateur videos showed the structure engulfed in flames several metres high. No one was injured.

Conservationists have vowed to continue their fight to restore the pier. They are hoping that much of the building's ironwork has survived.

Anthony Willis, from the National Piers Society, said: "It will need a lot of money to put it right, but it's still there. I'm pretty sure that the ironwork and the piles and a lot of the bracing is still very sound. Sometimes putting fresh buildings on is actually cheaper than restoring old buildings."

Hours before the fire, the Hastings Pier and White Rock Trust had invited architects to submit designs to redevelop the attraction. The trust was hoping to secure community ownership of the pier, after persuading the local borough council to use compulsory purchase powers to buy the attraction from its offshore owners.

The council leader, Jeremy Birch, said he had no idea whether the pier was insured as its "totally absentee owner", the Panamanian-registered Ravenclaw, had not been in touch for a number of years.

"The council will now be looking at a new structural survey so that we can be absolutely clear on the degree of damage to the substructure," he said. "Then we can see what the future holds for this iconic building on our seafront."

The structure was designed by Eugenius Birch, master builder of many Victorian piers. It has survived previous fires, partial demolition during the second world war, fighting between mods and rockers, and concerts by the Rolling Stones, the Who and Jimi Hendrix.

Even before the fire, the National Piers Society, which was founded by the poet John Betjeman, placed Hastings pier at the top of its endangered list.
Top

What I was checking out was this photo -

It's in the booklet with the recent Bob Dylan Radio compilation that features So Like Candy. The credit reads ' Elvis Costello on Hastings Beach, 1991 by Keith Morris.'

It explains the location for the photo, clearly from the same session, used on the cover of the Other Side Of Summer single. It's clearly on the docks here in Dublin. It looks like I've found another location to include in a update of my 'MAIT glass in Costello/Dublin locations' project!
Top

John - your REAL Dublin challenge is to get your glass photoed at Elvis' old house!
I might be gone for a while if you need me
Top

Users browsing this forum: No registered users and 55 guests