karen oberlin his aim is true: the singular songs of elvis costello

karen oberlin his aim is true: the singular songs of elvis costello 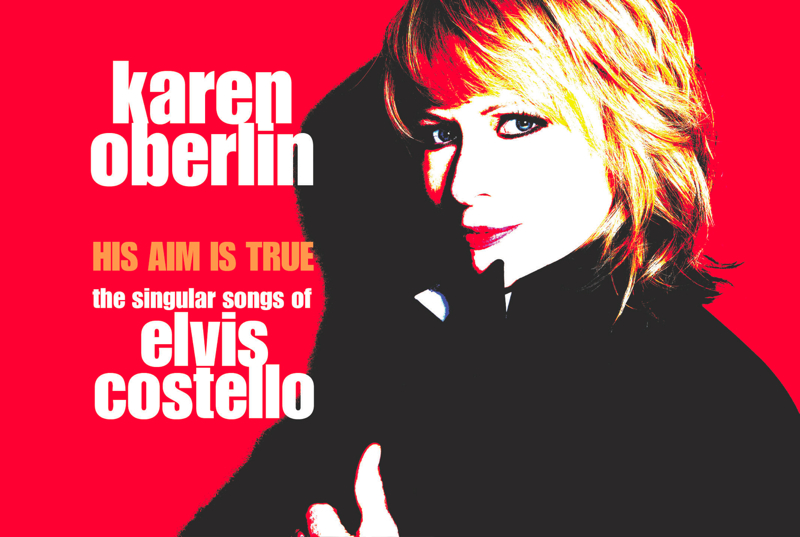 KAREN OBERLIN has been a fan of Elvis Costello since her early teens, when his young angst, disillusionment and vulnerable heart seemed perfectly in synch with her own. One of the most versatile and prolific contemporary artists, over the years Elvis has delved into innumerable genres and styles with passion and intelligence, including classical, jazz and pop. His many collaborative partners have included Burt Bacharach, the Brodsky String Quartet, Paul McCartney, Bill Frisell and the Jazz Passengers. For her new show, Karen brings forth a collection of material from her more than 30 years of following his eclectic, fascinating career to express some of the most intriguing elements of this unique singer/songwriter’s work and life. Tedd Firth serves as musical director, and they will be joined by Sean Harkness on guitar and Steve Doyle on bass.

Karen Oberlin, “His Aim Is True: The Singular Songs Of Elvis Costello”

With her new show His Aim Is True: The Singular Songs of Elvis Costello at Stage 72 (second show last night), you'll meet the new Karen Oberlin. Gone are the controlled vibrato, upper range, emotional translucence, femininity, and the playfulness of a purveyor of American Songbook/pop. Prepare for a terse, tensile, alto-voiced, punk chick (including shag hairdo) with a foot in rudderless jazz. There's nothing tentative in this raw, almost tone poem-like performance. Oberlin commits herself to her choices.

Bridged by brief, enlightening patter and occasional quotes, Oberlin offers 17 numbers written by Costello alone and with others. These include all but unknown collaborations with Paul McCartney and Burt Bacharach, selected perhaps for marquee value as they were among the weakest.

"Shipbuilding" (With Clive Langer) speaks to a childhood past Costello shared with fellow musician Sting. Here, it's wartime. ". . . They were building ships to replace those that had been sunk, often with their sons onboard." Or, as the song says: "Within weeks, they'll be re-opening the shipyards/And notifying the next of kin, once again . . ." Oberlin is utterly sincere. Legato phrases emerge confident, but almost monotone. Sean Harkness' lovely guitar (below in photo) response is melancholy.

"Aubergine" (with Brad Jones) is the first of intermittent jazz numbers that sound as if they might have been written in the bebop 1950s. It's an amorphous, up-tempo song with a touch of swing, with lyrics all but swallowed by accompaniment. (Reading them after the fact, I'd be hard pressed to attribute meaning in any case.) Music Director Tedd Firth offers the kind of piano solo only real jazz men can execute--episodic, emphatic, wandering. ("What's So Funny 'Bout) Peace, Love and Understanding" (with Nick Lowe) is so fast, fraught, and impenetrable, lyrics are also lost.

Sometimes the artist's performance rescues an otherwise oblique offering. "My Flame Burns Blue," written to the last tune composed by Billy Strayhorn, is a sort of inebriated, melodic weave. Towards the end, Oberlin opens her throat exposing a brightness of sound kept under wraps up till now: "If I seem a stranger/I feel far from danger/We tamper and we toy/With passion over joy/Even though my flame burns blue." The stage briefly glows.

"Veronica" (with Paul McCartney), here oddly and consistently pronounced "Veroni-ca-ah" (not as in any Costello recording I could find), is a story song about the writer's dementia-riddled grandmother. Despite a shapeless, bruising tune and poetry without cadence, Oberlin sells the truth of its emotion.

For my money, the best on all counts is "Almost Blue." Unlike any other Costello with which I'm familiar, the mellifluous, smoky torch says what it means. Oberlin's sensitive, empathetic lamentation is completely on target. Her last "blue" stretches into three syllables, every one appealing.

Elvis Costello is an acquired taste. His dense, polyrhythmic work eludes accessible melody; latter-day hipster lyrics eschew not only rhymes but also syncing lyrical vocabulary. I'm not a fan. This prejudices me against the similar, colorless material, but not the singer. Karen Oberlin is out there with all she's got. Unfortunately, these songs do not showcase her abilities. While I'm interested in her newfound range and pithy vocals and applaud her desire to explore, Costello buries what otherwise might garner praise.

The band's musicianship is first rate. Besides consistency and above call-outs, Steve Doyle's very cool bass contribution to "The Girl in The Other Room" is superb.

An odd criticism that makes me wonder what other songs were performed. EC is often guilty of jamming in too many syllables for the meter -- or at least too many for any other singer to navigate -- but he's always been a rhymer.
Top

I am going tomorrow night, as it's nearby my apartment and only 25 bucks!
AKA: Mike the Lawyer
Top

Elvis's official site has linked a review of this , make of that what you will.
Top

An odd criticism that makes me wonder what other songs were performed. EC is often guilty of jamming in too many syllables for the meter -- or at least too many for any other singer to navigate -- but he's always been a rhymer.

I just got back from this, it was actually pretty good. Here is the full set list (not necessarily in exact order):

Man Out of Time
Shipbuilding
Beyond Belief
Aubergine
Alison
Everyday I Write the Book
Shot With His Own Gun
Blood Count (My Flame Burns Blue)
Almost Blue
Mistress & Maid
Couldn't You Keep That to Yourself
Veronica
The Girl in the Other Room
I'm in the Mood Again
God Give Me Strength
Peace Love & Understanding (started as ballad, then SNL stop "I'm sorry ladies and gentlemen, there's no reason to do this song," then fast version of PLU)
The Birds Will Still Be Singing (off mic)
AKA: Mike the Lawyer
Top

Thanks, stricttime81. Most of these songs seem pretty rhymey to me -- "Beyond Belief", for example, rhymes all the heck over the place -- so I don't know what the reviewer was complaining about.
Top

Review: Karen Oberlin’s ‘His Aim Is True,’ a Tribute to Elvis Costello

Karen Oberlin’s extensively researched, beautifully executed tribute to the music of Elvis Costello answers a question that has been gnawing at me for years: Why have so few of Mr. Costello’s songs achieved the status of modern standards? For all this time, I had assumed that his raw, unwelcoming voice, with its strangulated diction, was the reason. Surely, a better-equipped singer could untangle his knotty lyrics and sharpen the melodic profiles of songs that Mr. Costello presented as impassioned downbeat mystery stories.

But no. In the show, “His Aim Is True: The Singular Songs of Elvis Costello,” Ms. Oberlin’s warm pop voice, tinged with just the right edge of post-punk impatience, revealed Mr. Costello’s songs to be resistant to explication. Even with the most knowing interpreter, his hyper-clever, verbose musings remain cryptic. To one degree or another, they are codes to be cracked — or not.

On Thursday evening, Ms. Oberlin’s excellent band — led by Tedd Firth on piano and featuring Steve Doyle on bass and Sean Harkness on guitar and harmony vocals — made a powerful case for Mr. Costello’s body of work as a genre unto itself, closer to bebop than to pop or punk rock.

Because Mr. Costello came out of the punk movement, his self-presentation, even now, conveys a tone of defiance and contempt. No matter how insightfully interpreted, his clotted verbiage suggests a songwriter choking on his emotions while paradoxically avoiding the tiniest hint of sentimentality. Ballads like “Almost Blue” and “I’m in the Mood Again,” which Ms. Oberlin infused with a tinge of irony, were the closest the program came to surrendering to pop convention.

The key to a great ballad like “Almost Blue” was the word “almost.” The song leads you toward a cathartic release of tears, then leaves you frustrated and dry-eyed on the edge of an abyss.

Thursday’s show confirmed Mr. Firth to be the most gifted, stylistically far-ranging musical director on the New York nightclub scene. Several of his brilliant piano solos plunged deep into an esoteric realm where tempos shifted and collided and listeners were pitched about on the high seas of jazz.

For Ms. Oberlin, “His Aim Is True” is a major leap forward into full-scale noir, an artistic demimonde that she illuminates with a dark blue glow.

@KarenOberlin Congrats. Fine work explaining my shabby songs to poor Stephen. Do you think he knows any Davis Sisters hits? Yeah, that one.

Karen Oberlin at the Redhouse: https://www.youtube.com/watch?v=9-glG-aPoWc
February 19 & 20 @ 8:00PM
Since you put me down, it seems i've been very gloomy. You may laugh but pretty girls look right through me.
Top

Karen sings GGMS: https://www.youtube.com/watch?v=ANABJ9KHls4
Since you put me down, it seems i've been very gloomy. You may laugh but pretty girls look right through me.
Top
Post Reply
12 posts • Page 1 of 1

Users browsing this forum: No registered users and 68 guests