EC at the Grammys

EC at the Grammys

as the Grammy Awards pay tribute to the hurricane ravaged city. The segment will also feature participation from Bonnie Raitt, U2 guitarist the Edge and soul music great Sam Moore.

"Our Academy represents thousands of music people across the country, many of whom were directly affected by the New Orleans tragedy," says Recording Academy president Neil Portnow, noting that the 48th annual ceremony "wouldn't be complete if we didn't take this unique opportunity to pay homage to a region with such rich musical history and culture."
Since you put me down, it seems i've been very gloomy. You may laugh but pretty girls look right through me.
Top

There are some rehearsal pictures over at http://www.wireimage.com
Top

Damn Elvis is stealing my fashion licks - I have that exact same shirt. DAMN HIS EYES!
echos myron like a siren
with endurance like the liberty bell
and he tells you of the dreamers
but he's cracked up like the road
and he'd like to lift us up, but we're a very heavy load
Top

I love seeing Elvis doing the Grammy's tributes (Joe Strummer a couple years ago and the New Orleans one this time around). But I'd love to see the tribute sans Bruuuce. Apologies to Springsteen fans, but I can't stand his music. Should be neat regardless. Perhaps we'll get a taste of the upcoming AT/EC album? I'm feeling either a "River in Reverse" or "Freedom for The Stallion" performance, likely mingled in with one or two other New Orleans-ish songs. But the reality is, I have no f'n clue what I'm talking about.

I'll just look forward to seeing whatever our man has to offer tomorrow night.
Top

I hope the video clip will be available somewhere online afterwards, because I'm not sure I can bear to watch the Grammys anymore.
This morning you've got time for a hot, home-cooked breakfast! Delicious and piping hot in only 3 microwave minutes.
Top

BlueChair wrote:I hope the video clip will be available somewhere online afterwards, because I'm not sure I can bear to watch the Grammys anymore.

I gave up years ago. I did tune in for "London Calling" with EC and Bruce, but that's it.
Mother, Moose-Hunter, Maverick
Top

BlueChair wrote:I hope the video clip will be available somewhere online afterwards, because I'm not sure I can bear to watch the Grammys anymore.

A big DITTO to that.
I'm not angry anymore....
Top

Got to love 'The Night Tripper'! Great talent! He also worships AT and PLH.

I highly recommend Dr. John's book especially with EC linking up with AT.

Really great stuff on NO and the LA music scene (he really hates that place and I don't blame him!). Also talk about a TOUGH life. Heroin addict at 10 years old! Prison and on and on. I met him a while back and had him sign (very unique sig) my copy. I told him it was a great read. He said he wouldn't do it (meaning his life) over again and he was dead serious!

I hope the video clip will be available somewhere online afterwards, because I'm not sure I can bear to watch the Grammys anymore.

I gave up years ago.

A big DITTO to that.


I ALWAYS watch this and the Oscars. It's like watching an ant farm - you know what's going to happen, but there's such an orderly progression. A train wreck in slo-mo. Anyway, I don't watch any reality tv, so I bank all my soul-diminishing viewing for these two nights. And once in a while, interesting things happen.
Like me, the "g" is silent.
Top

Elvis and AT indicated in their CBS Nightly News interview that they are closing the Grammy's. That would put them likely in the 10:30-11:15PM EST time slot. I'll let the Left Coast folks know - if I don't fall asleep before then.

Elvis's mike was nearly off.
Great guitar work against the Edge
A Beatle in row 2 watching it all.
Top

some photos zipped up
grabbed from video

So what did Elvis actually sing? And was his vocal mic turned down, or his guitar?
Top

I'm wondering the same myself. Here's a picture from the BBC 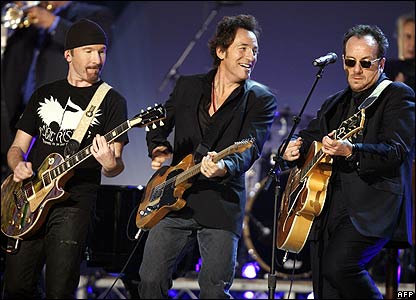 All of the vocals were messed up in the live mix. The guitars sounded great, especially EC. I think we were hearing monitor mixes for the vocal sounds. What a shame.

PS: Anybody notice who that rhythm section was?

A large group of artists, including Allen Toussaint, Dr. John, Irma Thomas and Elvis Costello participated in the finale, a tribute to New Orleans. They did "Yes We Can Can" and "In the Midnight Hour," with the latter also honoring the late Wilson Pickett. Unfortunately, it was cut short because the telecast went on too long.

The Grammy Awards tonight will include a musical tribute to New Orleans and Southern soul from a specially convened all-star supergroup.

Yesterday, as our exclusive backstage snaps show, Edge joined some of these legendary musicians to get in the groove for this special New Orleans moment.

Word is that those involved include local musicians Allen Toussaint, Irma Thomas and Dr John along with Elvis Costello, Bruce Springsteen, Sam Moore and Bonnie Raitt.

'Our Academy represents thousands of music people across the country, many of whom were directly affected by the New Orleans tragedy,' said Neil Portnow, President of The Recording Academy. 'Music's biggest night wouldn't be complete if we didn't take this unique opportunity to pay homage to a region with such rich musical history and culture. New Orleans, we'll always be there for you.'
Top

martinfoyle wrote:I'm wondering the same myself. Here's a picture from the BBC

keep hitting the next button (but you have to watch the commercials, sorry!) - he's last.

Allen Toussaint - Yes We Can Can

Now is the time

keep hitting the next button (but you have to watch the commercials, sorry!) - he's last.

I thought her legs looked phenomenal! 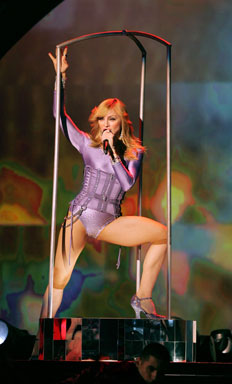