Anyone live-tweeting the setlist?
Top

Anyone else going?
Top

Don't worry about not tweeting the setlist - just as long as you post it here!
It’s such a shame you had to break the heart you could have counted on
Top

Sorry, that's not my thing, VG

! I will try to post the (IMHO) highlights though!
Top

Setting up for tonight's show in San Diego

A preview of tonight's show in San Diego , including photos from a show there in May 1978.

'Here are some photos taken by Jon Foster from 1978 at the civic center.
He smuggled the camera and lens in in two different purses'

Setlist.fm has a setlist. I don't know how accurate it is. "Another Brick In The Wall" was just a few lines, according to Suzanne on Facebook.

1. Uncomplicated
2. (The Angels Wanna Wear My) Red Shoes
3. Accidents Will Happen
4. 45
5. When I Write the Book / Everyday I Write the Book
6. Mexican Divorce
7. Another Brick In The Wall Part 2
8. Ghost Train
9. Ascension Day
10. Clowntime Is Over
11. Church Underground
12. American Without Tears
13. Watching the Detectives

i think the Drifters recorded it early on, but I've always enjoyed this Ry Cooder take on it:
https://youtu.be/5Cci6Jn2t-Y
Who put these fingerprints on my imagination?
Top

So have I. Lets hope a "pirate" was in the audience...

And No Coffee Table wrote:Setlist.fm has a setlist. I don't know how accurate it is.

It's gone through a number of revisions over the last hour or so.


On Twitter, @ecsongbysong (and Joyce Millman) has some setlist detail.
Top

@ecsongbysong wrote: I thought I dreamed it, but it was for real. Just one iteration through the verse and chorus, but uh... yeah.

@joycemillman wrote:Ooh! I figured it out! Was played in or near Mexican Divorce, right? It's a ref to Trump's wall on the border.

@ecsongbysong wrote:Oh, of course! I must say, it didn't play in the room, beyond widespread bafflement. It was cool to hear

And I think Another brick in the wall was another political reference.
It’s such a shame you had to break the heart you could have counted on
Top


Elvis Costello was in San Diego last night at the Balboa Theatre, and a few lucky FM 94/9 listeners and I had the chance to see him. For me, it was the first time, and often, weighed down by a lifetime of expectation, shows like this can turn out a little under whelming. Elvis Presley might be 'The King' but Costello held court in San Diego last night. From the moment he walked on stage, alone, in almost total darkness to perform Complicated Shadows, he grabbed ahold of the sold out crowd, and never let go. Through an almost 3 hour, 30 song set that included two encores, 85% of which just featured Elvis sans backing band or other musicians, he commanded the room in a way I've rarely experienced. In our millisecond attention span culture, where flash, pomp, and circumstance is usually the champion of the day, having a musician of Costello's caliber, with a catalog spanning parts of 5 decades, simply walk on stage, share his stories and his music in such a personal way, and have a silent room hanging on his every word and note was incredibly refreshing. He hit some fan favorites including Accidents Will Happen, Watching the Detectives, Beyond Belief, and during his first encore, Alison and Pump It Up, but the evening was full of unexpected treats and surprises.

Ping ponging back and forth from a choir of acoustic and electric guitars behind him and the grand piano, he covered Los Lobos (A Matter of Time) Grateful Dead (It Must Have Been The Roses) Pink Floyd (Another Brick In The Wall Part 2) The Davis Sisters (I Can't Stand Up For Falling Down) Cliff Edwards (Side by Side) as well as an amazing, seemingly off the cuff tribute to the recently departed Merle Haggard (The Bottle Let Me Down). A friend who was working at the venue told me that Costello's people had warned them ahead of time "He's been going a little bit long lately," which they took to mean 20 or 25 minutes, but when the dust settled, Costello had performed for nearly an extra hour, and not only lived up to all my expectations, but surpassed them all in glorious fashion.


In a world of managed expectations, auto tune, and backup dancers, it was a reassuring experience to see that music is still alive and well. Long live THE KING. 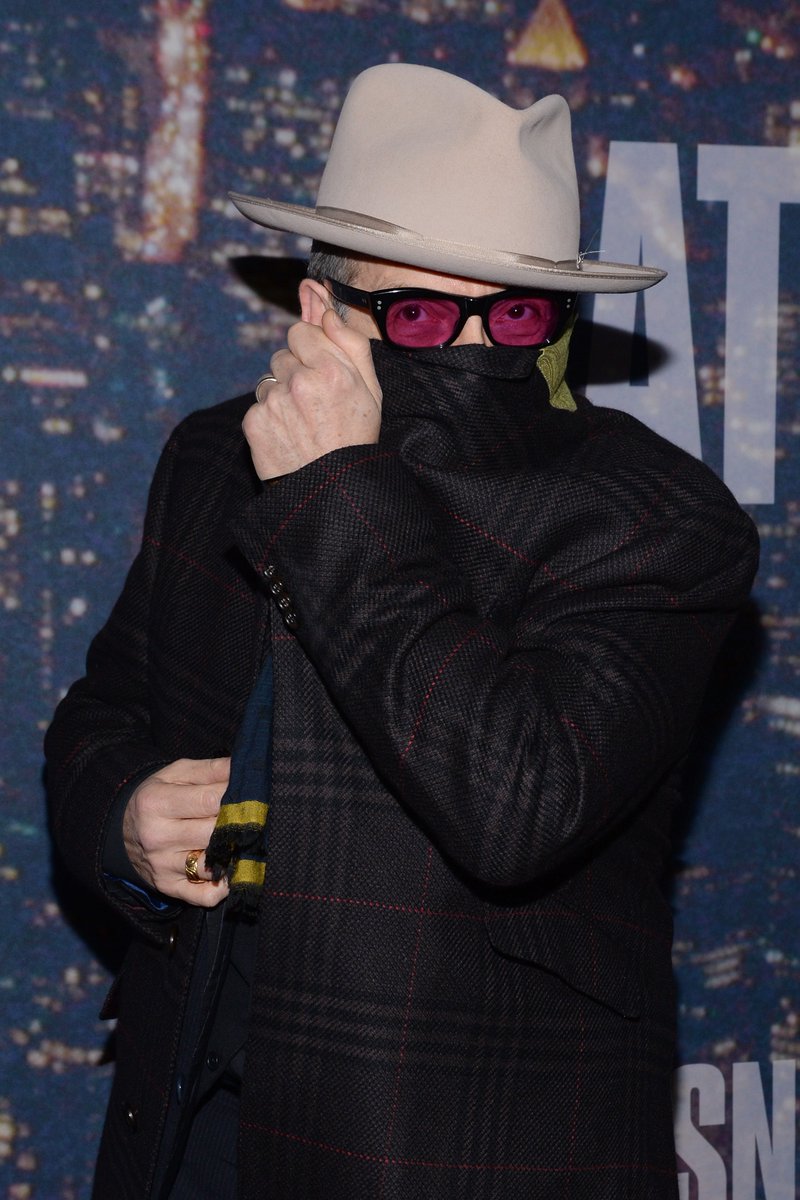 Elvis Costello perseveres in marathon San Diego show
Beset by vocal problems, the Rock and Roll Hall of Famer got his second wind, with help from his opening act, Larkin Poe, and an inspired Merle Haggard tribute

Perseverance and artistry paid off in a big way for Elvis Costello Thursday night at the Balboa Theatre. The 2003 Rock and Roll Hall of Fame inductee was able to overcome his atypical vocal problems through determination, some key help from his potent opening act, Larkin Poe, and the sheer force of Costello’s personality and gem-filled songbook.

Where a less-experienced, less-gifted performer might have cut the set short, Costello dug down deep, after repeatedly being unable to hit most of his marks on his most well-known and obscure selections alike.

While he faltered and plodded through much of the first half of his nearly 2-hour-and-40-minute show, he came alive in a very visceral manner for the second half. The result almost qualified as two concerts in one.

The first half featured around 20 songs, beginning with “Uncomplicated” and concluding with “Watching the Detectives.” The latter number was one of several in which Costello, 61, electronically looped his rhythm guitar part so he could play a distorted, bare-bones lead on top of it.

The sold-out show’s opening portion lagged because of Costello’s often painfully strained voice, bumpy pacing and an over-amplified sound mix — how hard can it be to get a good balance with just one vocal microphone and guitar?

His singing was diminished to such a degree that the top half of Costello’s range seemed to have vanished, as he repeatedly reached for notes beyond his grasp. He had no such problems during his masterful 2010 solo performance at the Balboa (which also boasted a far superior audio mix).

Thursday’s focus on ballads may have been fine if Costello’s voice was in tiptop shape. So would his decision to deliver such spirited favorites as “(The Angels Wanna Wear My) Red Shoes” and “Everyday I Write the Book” at torch-ballad tempos. But not at a show where he audibly struggled and hit one clam after another.

Costello’s penchant for slow tempos worked better in some instances, including a deft medley of “Clown Time Is Over,” “Mexican Divorce” and a portion of Pink Floyd’s “Another Brick in the Wall (Part 2),” all of which he sang while playing a piano at one end of the vintage TV-themed stage.

“Brick” had a humorous subtext. When introducing “Accidents Will Happen” earlier in the concert, he recalled a romantic fling in Tucson that ended when his fleeting paramour expressed her preference to hear all of side two of Pink Floyd’s “Dark Side of the Moon,” not Costello’s choice, Iggy Pop’s “The Idiot.”

Happily, the concert’s second half — which featured just under 20 songs divided between three encores — was vastly better.

The first half, to use a running analogy, suggested Costello would have struggled to complete a 10K run, even at a saunter. But during his encores, he was almost magically transformed into a marathon man.

He found his rhythm and most of the notes that had previously eluded him. He may also have been inspired by the spirited instrumental and vocal accompaniment on most of his encores from Larkin Poe — sisters Rebecca and Megan Lovell, who are 26 and 25, respectively.

A reanimated Costello sounded fully engaged, whether delivering a rousing “(What’s So Funny ’Bout) Peace, Love and Understanding,” ripping through “Pump It Up” with palpable punk-rock fury, making his 1977 lament, “Alison,” sound even more wrenching than usual, or paying heartfelt tribute to the late Merle Haggard with two exquisite country ballads, both by Haggard, “No Reason to Quit” and “Tonight the Bottle Let Me Down.”

In between the two Haggard songs, a large color photo was projected of Costello with Haggard and fellow country-music troubadour Hank Cochran. Haggard, Costello told the audience, “Was like Mt. Rushmore to me. Like many people in England, I learned his song from records by The Byrds, Gram Parsons and even the Grateful Dead.”

The Dead qualification was for the benefit of San Diego basketball legend Bill Walton, who was in an aisle seat near the stage and has attended more than 850 Dead concerts. Costello, also an avid Deadhead, performed the Dead classic “Ramble On Rose” with Walton at Humphreys Concerts by the Bay in 2012. On Thursday, Costello and the Lovell sisters sang an achningly beautiful version of the Dead’s “It Must Have Been the Roses,” which paired very well with their two Haggard selections.

Ever the raconteur, Costello told more than a few stories between songs. Several were about his late father, English singer and big band leader Ross MacManus, who was one of his son’s biggest artistic inspirations and — in 1963 — shared a stage with The Beatles at a Royal Command Performance in London. Ross performed “If I Had a Hammer,” which (Costello joked) “was a favorite of the Queen Mother.”

It’s unfortunate some attendees left before the encores, when Costello belatedly kicked into gear and his music came fully alive. It was well worth the wait.
Top

"The sold-out show’s opening portion lagged because of Costello’s often painfully strained voice, bumpy pacing and an over-amplified sound mix — how hard can it be to get a good balance with just one vocal microphone and guitar?"

Hmm... A comment about the sound mix... Interesting. Whatever. Sounds like the sound guy actually received a negative review here.... Sorry to point this out... Just trying to back up my SF post. Peace! (actually, I don't care, but my aim is true - I do not like the US Detour sound guy)... Later / over and out / forever / peace - MOJO
Top
Post Reply
32 posts