Roll call for people going to this!
Top

I shall be at this show. Friendly smaller auditorium.

Yep, I'm off to this one, with my bro! See you there!
Top

Yes - a triple Elvis weekend
Is that so surprising nowadays?
Top

Likewise with MOOT, Fishfinger and Neil and his good looking brother

Largely the same wheel but some changes. Additions include: She, Tiny Steps, New Lace Sleeves and Watch Your Step.

Julie Lake wrote:Fame at last! On the stage in St David's Hall with Elvis Costello dancing to a Johnny Cash song. 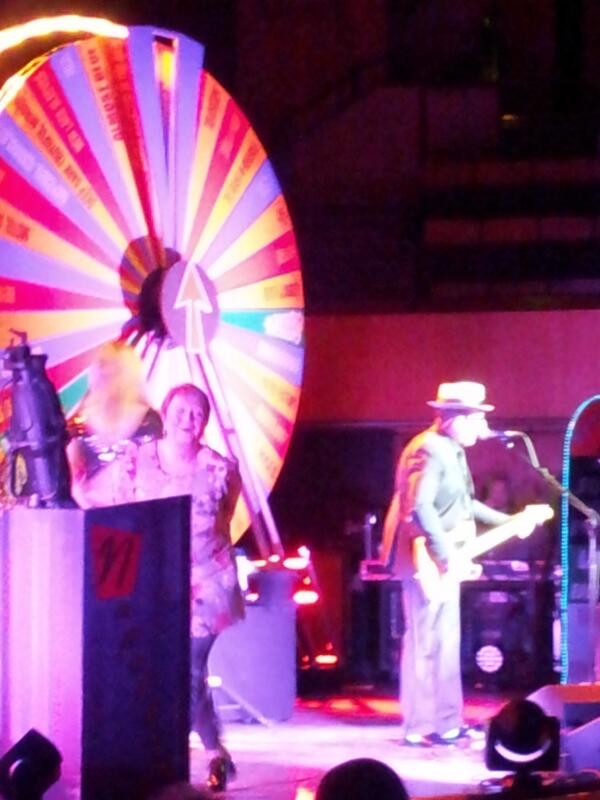 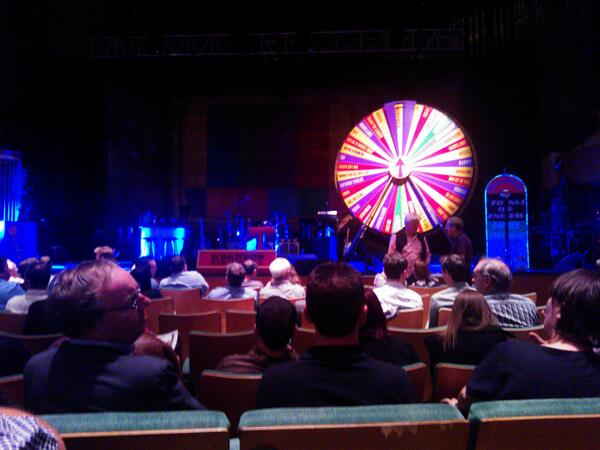 This 10 year old had two go go dancers and his mum in the go go cage. Almost lucky 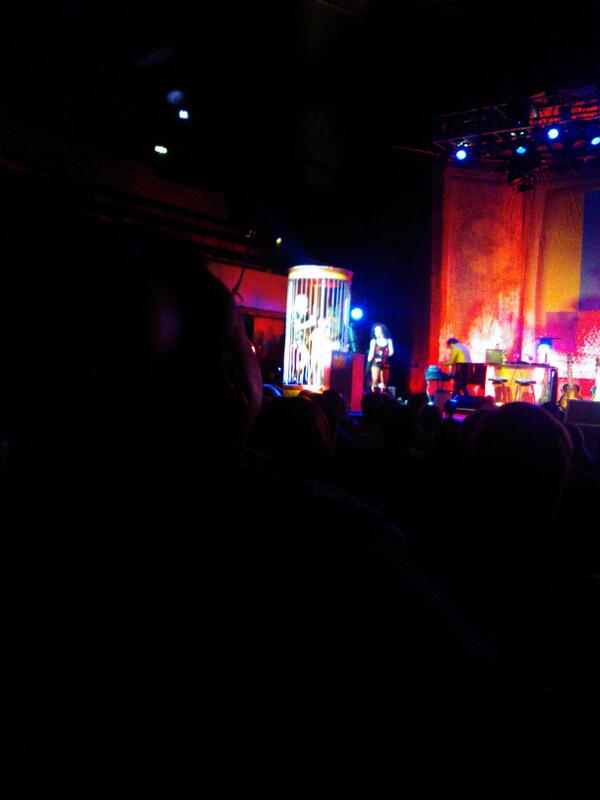 Some curiosities tonight. A better show than Birmingham (Sulky Lad and I agreed). The initial spins brought more jackpots, which allowed Elvis to pace the show better. After spin 6 (Cash) he told the Johnny Cash in Shepherd's Bush anecdote, which you will all be familiar with, then went into a Country section of the show and took control of the running order himself. This led to some rather odd choices. Why he chose to play London's Brilliant Parade to a Welsh audience was not clear. He introduced a couple of songs with words to the effect of "We're now going to play a song we've not played in a long time". There was a distinct look of fear in Steve's eyes at a couple of moments. He must have nightmares in which Elvis says those words and then launches into a song that he (Steve) cannot begin or follow. This nearly seemed to happen with London's Brilliant Parade. Drum & Bone was another odd choice.

Then came Tramp The Dirt Down, apropos of nothing. This was played at the same point in the show as last night, but tonight Elvis chose to play it without any prompting from the audience (although it was well received). He made a speech about not saying anything at the time of Thatcher's death, and that this song was now not so much about wishing a person dead, as about wishing to see their ideas die. On that basis (he argued) as long as Thatcherite ideas held sway in Government, he would continue to play this song (and did). This was a step forward from yesterday when he seemed very ambivalent about the song. On this basis, you can expect to hear it again on this tour (requested or not).

Following the "Girl" jackpot, Elvis played Girls Talk, described as a hit for the "King of Monmouth". Dave Edmunds is from round that way so this was fitting. How this led to "Heart Of The City" is less clear, although there is a Dave Edmunds: Nick Lowe connection. Secondary Modern has a chorus with the word "girls" in it, so there we were back on track.

As in Birmingham, Elvis went "walkabout" in the audience with a microphone to sing "Help Me", and pick out some more wheel spinners for himself.

At the start of the second encore, Elvis and Steve only reappeared and Elvis turned the wheel to the "Joanna" banner, explained that this was cockney rhyming slang for Piano (always good to explain Cockney to a Welsh audience) then invited Steve to play. Steve is not very prominent in this show, often obscured by the society lounge, wheel spinners, a portable TV and the go-go cage, so this felt like recompense for that.

A better show than Birmingham. Elvis stretched his voice a little more (with some off-mic singing) and talked a little more too. Tramp The Dirt Down was sung more like he meant it. He seemed a little distracted after "Jimmie" but had clearly taken the setlist into his own hands for that portion of the show.

It also seems that there will be variation in the wheel (see the Wiki in due course for full details) with around 8 changes from the previous night, and that Elvis will also play different songs not on the wheel, if he feels like it. Quite how many songs the band know, only time will tell. Tonight saw The Imposters first ever performance of "London's Brilliant Parade" so let us hope there are more such to come.

I may be wrong here, but at several points I had the impression that Elvis was using an autocue to help him with lyrics. On stage there is an odd plastic moulded lectern which seems to be a mount for a laptop. My assumption is that some off-stage assistant can call up lyrics to songs that are spun as and when. Elvis did not refer to it for every song, but on some of the more obscure ones (like Dr Watson) he did appear to be reading from it. See what you think when you see him next.

Finally, before the doors were opened, whilst Sulky Lad and I were waiting in the bar, Pete Thomas appeared and told us that he was looking for his cousin. We wished him luck and Pete moved on through the throng. Next thing we see, Pete is standing chatting to the equally tall Neil. The thought flashed through my mind that Neil might be Pete's cousin, and had somehow failed to mention this very relevant fact. Neil later assured us that this was not the case, but we never did see Pete with his real cousin.

thanks MOOT...so very pleased to read your recap of the night. glad to see nice selections already like SONG WITH ROSE, LONDON'S BRILLIANT PARADE, HOME IS ANYWHERE and DRUM & BONE as four semi-oddball surprises already. hope ROSE stays around. GREAT song! but, the BEST 5 letters of your post:

Only the ninth known performance of "Drum & Bone."

The first time either song has been played live in Europe, and I have to thank Sulky Lad for spotting that it was Drum & Bone.

MOOT (former employee of the University of Liverpool)
Top

Dixie in costume for the Cardiff show.

MOOT (former employee of the University of Liverpool)

That, my friend, is an amazing bit of history.
Top

bronxapostle wrote:thanks MOOT...so very pleased to read your recap of the night. glad to see nice selections already like SONG WITH ROSE, LONDON'S BRILLIANT PARADE, HOME IS ANYWHERE and DRUM & BONE as four semi-oddball surprises already. hope ROSE stays around. GREAT song! but, the BEST 5 letters of your post:

You can see Paddy in the background of Dixie's instagram pic!
Top

On the first audience photo from twitter, the two tall gentlemen with white shirts looking slightly towards each other are Neil (on the left) and his twin brother Chris. I was right about Chris being Neil's good looking brother but Neil looked 5 years younger, obviously due to being semi preserved by pickling in alcohol !!
It was great to see him, he pumped us about the Birmingham show and then didn't want any details so the opportunity to pretend we'd heard songs like Dr. Luther's Assistant wasn't resisted ! Also met with Peter Horstead and Anna who'll meet us all at RAH and Gateshead.
MOOT has summed the show up perfectly, nothing to add except the fact that. like Liverpool followed by Birmingham last year, the setlist was dramatically different and the choices seemed to flow much better than at Birmingham and the sound seemed exceptionally good. It wasn't quite sold out, I was dead centre, row D ( you can see my left shoulder by the side of the receding man's head in the aforementioned photo) and had an empty seat beside me and MOOT secured a row H seat at 5 pm for his son Michael, making his second EC show after Bristol and the Brodskys - some contrast ! A lot of much younger people got to spin the wheel including a young couple where the young man was obviously a bit embarrassed as Elvis did the little dialogue about the proposal that occurred in Boston.
Top

MOOT has a song missing from the setlist - When can any of us have said that before?
Hi Fidelity was again the second song.
Agree 100% with the analysis though.
Better acoustics
Better atmosphere
Better song flow & choices
than Birmingham.
For a Welsh show I thought it very much showed off Elvis' English pop
sensibility with Girls Talk, Everyday I Write the Book, London's BrillIant
Parade, Secondary Modern, Watch Your Step - Cash interlude aside.
Elvis can still surprise - the 2 Momofuku rarities.
Explaining Tramp also made more sense- though I'd rather hear Pills &
Soap.
Bristol will have a hard job matching this.
Is that so surprising nowadays?
Top

I saw Paddy at the side of the stage on Friday in Birmingham.

As with last year the second night varied considerably.

There are plenty of songs I'd rather have seen from the Cardiff show. Hopefully I'll get to see them later on the tour.
It’s such a shame you had to break the heart you could have counted on
Top

Dixie posts this sans caption today. I think it is Cardiff, but could be Bristol.

Man out of Time wrote:Dixie posts this sans caption today. I think it is Cardiff, but could be Bristol.

Luke Collinson wrote:Elvis Costello & The Imposters live in Cardiff...what a show...just got better and better...

For posterity's sake, here's the official site's version of the setlist.

Everyday I Write The Book - Spin 3

Heart Of The City - IMPROMPTU

Dr. Watson, I Presume
Home Is Anywhere You Hang Your Head
Watching The Detectives/Help Me

The Hammer Of Songs

I Still Have That Other Girl

Ain't got a lot to add to Sulky and MOOT's posts - I even concur with my youthful appearance (Irony!!!!) being due to being pickled in alcohol!

I would add that Elvis did seem to be a little bit disengaged at the gig - he wasn't half as 'into' it as last year's shows. Perhaps his mind is on the Roots stuff?

But there were some highlights - a near flawless 'I Still Have That Other Girl', with stunning flourishes from Steve.
Amazed that Elvis can still hit those notes - though he was definitely saving his voice in some of the songs, presumably for the big London gigs. That's a little annoying for those in Cardiff, Birmingham etc.

I would add that he should be very aware that if he's that disengaged for the Glastonbury gig, it will be seen in big closeups on television. Elvis, make sure you engage more at Glasto! Look at the audience a lot - smile etc!

Really enjoyed the embellished 'Jimmie' and 'Josephine', with deft, understated backing from the Imposters, unlike the solo versions of last year. And I'm always moved by PLU. Shipbuilding was also really good.
Top
Post Reply
35 posts