This is for all non-EC or peripheral-EC topics. We all know how much we love talking about 'The Man' but sometimes we have other interests.
Post Reply
1700 posts

Back to the Ancient Techno;ogy Centre at Cranbourne in Dorset (replica neolithic mud hut) for Hugh Lupton (storyteller) and Nick Hennessy (muscian) doing the Liberty Tree:

To live outside the law you must be honest

Robin Hood boasts to the Merry Fellowship about the ten-tined stag he’s just killed and gralloched even as the air fills with the sound of the baying of the sherriff’s hounds…
as he always has boasted somewhere in the leafy shadows of our minds, and as he always will as long as tyranny rides rough-shod over the green freedoms of England.

Hugh Lupton and Nick Hennessey tell and sing their way deep into the secret, dappled heart of Sherwood… and the ancient tradition of English dissent.

This is where the gig is, you actually step down when you enter and it has room for about 300 people. A big fire is lit in the centre with smoke going through the hole in the roof that is at the top of the mound. Mulled apple juice in the interval. 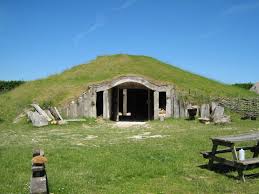 Amazing venue! Never one to miss out on a new word, I was imagining 'gralloched' having a French-style 'gralloshed' pronunciation, but of course it's Scots with a 'k'. 'To eviscerate a deer':
http://en.wiktionary.org/wiki/gralloch

Joanna Newsom was sublime. I can't praise her enough. An incredibly unique talent. Very good support band, some of which were key players on 'Have One on Me'. The Birmingham Symphony Hall was a bit lacking in atmosphere, though the acoustics were excellent. I'd prefer to see her in the above venue! Looks well suited to some heavenly harp.

She opened with '81, my vote for 2010's finest song, just her with solo harp, and thereafter the band came on. She moved between harp and piano throughout. I was too far away in the balcony, and she was mostly obscured by harp. The flash photography was incredibly irritating. Roy Harper was an interesting support act - 69, bit of a cult figure, still sings and plays well and has interesting songs, and some nice banter ('this song is about the old religion, which in many ways is more human than the new religion with its Matthew, Mark, Luke and John politics'). Hats Off to (Roy) Harper.
There's more to life than books, you know, but not much more
Top

A good night at the Earthouse too. As well as Robin Hood, we had stories about the Diggers and John Ball. If you ever get a chance to see Hugh Lupton I would highly recommend it as he is a most excellent teller of stories. Nick Hennessy also very good at stories as well as song.
signed with love and vicious kisses
Top

The only thing that's been troubling me about the Earthouse is that presumably a sizeable percentage of the audience is veggie, so how does gralloching go down among them?
There's more to life than books, you know, but not much more
Top

It's the new chilled, reflective Otis,
There's more to life than books, you know, but not much more
Top

mmmmm more venison for the rest of us!
signed with love and vicious kisses
Top

Van Dyke Parks was excellent. Saw him at the Andy Warhol Museum. I was not very familiar with with his solo work, but I was interested in seeing him. He is a very good pianist. Hard to label what kind of music he plays (jazz, chamber, Appalachian). He played with a chamber trio (electric guitar, viola, violin) Opening for him was Clare & The Reasons. Clare Muldaur is Maria's daughter and she has a very pretty voice. The Reasons were Mr. Parks backing musicians.
It is better to keep your mouth closed and let people think that you are a fool than to open it and remove all doubt
- M. Twain
Top

I mistakenly reported that Clare was Maria's daughter. While Maria was married to Geoff Muldair it is Geoff's second wife that is the mother of Clare.
It is better to keep your mouth closed and let people think that you are a fool than to open it and remove all doubt
- M. Twain
Top

Glad we got that one cleared up!
There's more to life than books, you know, but not much more
Top

Well we haven't quite got it cleared up BWAP.

Is it Muldair or Muldaur (the question might come up in a pub quiz and I don't want to lose points for misspelling).
Love is the one thing we can save
Top

A bunch of comedians.
It is better to keep your mouth closed and let people think that you are a fool than to open it and remove all doubt
- M. Twain
Top

http://www.npr.org/templates/story/stor ... =130569463
It is better to keep your mouth closed and let people think that you are a fool than to open it and remove all doubt
- M. Twain
Top

Fulfilled a long time ambition to see Cheap Trick ( fairly infrequent visitors to these shores) at The Wolfrun Hall, Wolverhampton ( centre of the rock world !. My ears are still ringing, Rick's guitar playing and Robin Zander's voice exactly as they were when I bought Live At The Budokan from Our Price records in 1978 or so. Rick's son on drums never stopped smiling, played I Want you To Want Me 4th song in, California Man, and my favourite Surrender. Rick struggled with a bad cough and frequently seemed unable to join in vocal support but the ensemble playing was divine. If I weren't working for the next few nights I'd be travelling to the Shepherd's Bush Empire to see them again - although maybe not quite so close to the stage and speakers !
Top

Sulky Lad, I've been lucky enough to see Cheap Trick 4 or 5 times in fairly small venues. They are always fantastic, and you are right about how 'young' they sound. Why they are not in the Rock and Roll Hall of Fame is beyond me. And Bon Jovi is up for induction this year!
Top

I always loved Surrender too.

Had my 7th encounter with Lloyd Cole and my first with the Union Chapel, atmosphere last week. What a superb venue! It's a chapel! With pews! Great atmosphere and gave Lloyd some wry smiles and raised eyebrows at appropriate moments in some songs (there are lots of religious refs), e.g. 'It's no time for thinking about somebody up there'. Lloyd is in a happy place, it seems, on this tour. He has a fine new LP to expand his already mind-bogglingly superb back catalogue with, the best songs of which get aired tonight, with the maddening exception of the wonderful toe-tapper Oh Genevieve, which would surely have been great live. And he played most of my favourites from said catalogue. Hearing him open with 'You want to leave me baby, be my guest/All I'm going to do is cry' in such a venue with such an acoustic, well my spine was tingling madly.

He seems extra relaxed this time, maybe because he's hit 50 and growing into it, but perhaps moreso because he's part of a three piece, 'the Small Ensemble'. Two guitarists (with occasional banjo or mandolin). Never heard of them before: Mark Schwaber, Matt Cullen. Both very good, and both enhance and embellish the songs, taking the strain off his usual solo having to carry the whole song with 6 strings and voice. They put out a nice wbesite order studio CD earlier in the year of the three of them reworking old faves, plus a preview of two from 'Broken Record, on which both also play. They really do justice to old faves like Rattlensakes and the immortal Forest Fire.

Probably about as close to a perfect Lloyd gig as possible, other than touring with a really good full band, which I don't think he'll do again as he's anti having to strain over drummers.

Very excited as the next 6 months bring Divine Comedy (solo show), Squeeze, Arcade Fire, Elbow (touring new LP in spring - first visit to 02) and finally the also sublime Ron Sexsmith, touring new LP in spring, first time I'll have been at Barbican. Long may the wonderful live music continue.
There's more to life than books, you know, but not much more
Top

Going to see Squeeze at Chinnerys in Southend on Saturday night at a special warm up show for the UK tour. Hope Steve Nieve is also there. I know he is in the touring band
Top

Lovely - didn't know SN would be part of it. Extra exciting!
There's more to life than books, you know, but not much more
Top

Will also see Squeeze at Birmingham Symphony Hall on 30th. Just hope my vinyl NR is here in time to get it signed by Steve.
Top

sheeptotheslaughter wrote:Going to see Squeeze at Chinnerys in Southend on Saturday night at a special warm up show for the UK tour. Hope Steve Nieve is also there. I know he is in the touring band

Warm up shows tend to have a looser feel.

Don't forget to post a review.
Love is the one thing we can save
Top

Going to see Squeeze at Chinnerys in Southend on Saturday night

Lovely Southend on a blustery November night
hope the performance is uplifting and heartwarming !

It's pronounced Sarfend me old china!
Love is the one thing we can save
Top
Post Reply
1700 posts