It also says WFUV will be broadcasting the show the next day.

They are the best/damn public radio station in the metropolitan area- do not know what I would do if my dial was not constantly set to them- will listen intently the following day and save myself the trek to Brooklyn.

Great stuff.
It’s such a shame you had to break the heart you could have counted on
Top

Elvis Costello's musical path has led him to creative collaborations with the likes of Burt Bacharach, Allen Toussaint, and now The Roots. Wise Up Ghost, the highly-anticipated CD by Elvis Costello and The Roots, will be released on Blue Note Records on Tuesday, September 17th. That day at 12 noon WFUV (90.7 FM/wfuv.org) will broadcast a rare, sold out concert by Elvis and The Roots performing together, recorded the night before at Brooklyn Bowl.

The collaboration came about following one of Elvis's appearances on Late Night With Jimmy Fallon, where The Roots, hip-hop's most admired live act, are the house band. Roots drummer and producer Ahmir "?uestlove" Thompson, who has an equally voracious musical appetite, broached the idea of working together, and the result was Wise Up Ghost.

WFUV Program Director Rita Houston said, "Elvis is really the quintessential FUV artist, and we've always admired how he fearlessly explores different genres. The Roots, with their amazingly versatile musicianship, are a perfect match for him. Music discovery is at the heart of what we do, so we're especially excited to share the fruits of this new project with our listeners."

New York's Rock and Roots station WFUV (90.7 FM, http://www.wfuv.org) is a noncommercial, member-supported radio station, licensed to Fordham University for 65 years. WFUV has received national recognition for its award-winning weekday format of adult album alternative music, local and NPR news, and a diverse weekend lineup. WFUV's robust website has extensive audio archives, videos, song playlists, an events calendar, blog and other resources.
Since you put me down, it seems i've been very gloomy. You may laugh but pretty girls look right through me.
Top

Anybody going to record the WFUV broadcast?
Top

WOW!!! why the heck are they playing it at noon? gee...was thinking of taking the day off, now i might have to. though i'm certain SOMEONE else will capture it.
Top

I'll try. It means doing it at my office, but I think I can make it happen.
Top

I'll try. It means doing it at my office, but I think I can make it happen.

i'll bet you can doc! mayor bloomberg would not like me doing it at MY office.

great, Doc, I'm sure we'll all look for it!
Top

Good info!
noon in NYC means 5pm in UK and 6pm CET! or?
I will not miss that one!
Top


ONE NIGHT ONLY!
Elvis Costello and the Roots
Monday September 16
9:00 PM • Doors: 8:00 PM
21 and over
$40
Brooklyn Bowl
61 Wythe Avenue
Brooklyn, NY
Advance ticket purchase includes a Deluxe Edition CD of Elvis Costello And The Roots new collaborative album "WISE UP GHOST" that can be picked up at Brooklyn Bowl on the night of the show.
Top

SULKY!!!! no sulking...i've told you time and again: MOVE TO NEW YORK!

listened to your Friday night in Birmingham...REAL SWEET sounding AND a GREAT show. at least you will HEAR Brooklyn live on the (internet) radio...from a BRONX RADIO STATION!!!!!!!!! A++++++++
Top

https://www.dropbox.com/s/v5liepfneds2251/Memo.m4a
soundcheck as heard through the loading doors of the venue. sorry for the wind. it's a brisk night in brooklyn.
Top

monkey2man wrote:https://www.dropbox.com/s/v5liepfneds2251/Memo.m4a
soundcheck as heard through the loading doors of the venue. sorry for the wind. it's a brisk night in brooklyn.

That's an unexpected treat. Thanks.

If you're wondering whether @questlove would be djing at @brooklynbowl before @theroots + @ElvisCostello, the answer is yes. Yes, he is.

If anyone's checking the forum from the show, beware MAJOR SPOILERS below. 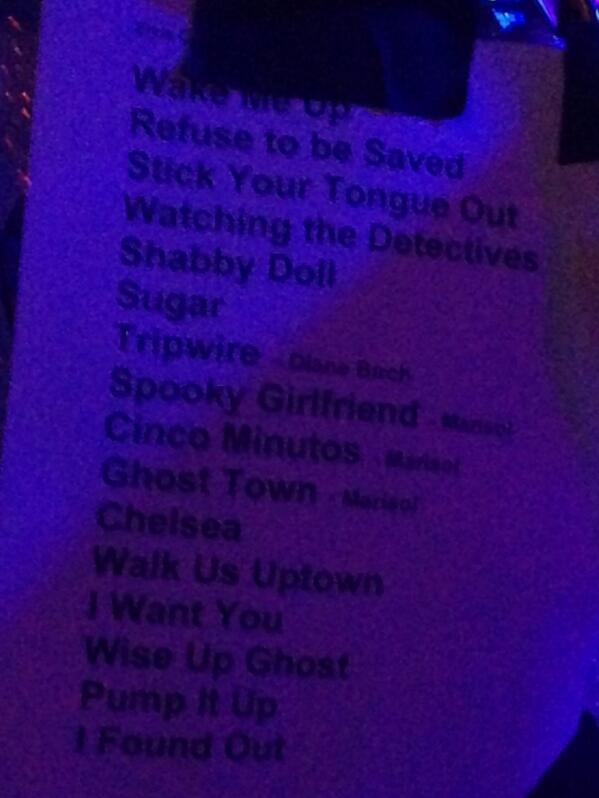 A few seconds of sideways video of "Wake Me Up": http://vine.co/v/hnY7KhLXgu0
Top

What would you say? What would you do? ‪@Elviscostello‬ ‪@theroots‬ Stick Out Your Tongue for Pills & Soap ‪http://vine.co/v/hnYAnHKYxLt‬

I've never seen a show like this. "Stick Out Your Tongue" is already a classic. ‪#wiseupghost‬ ‪pic.twitter.com/p1E37KUJ8F‬

She's filing her nails while they're dragging the lake. ‪http://vine.co/v/hnYbe5tp7tJ‬

Funkiest, greasiest version of Shabby Doll that ‪@ElvisCostello‬ has ever sung. Thanks ‪@questlove‬ and ‪@theroots‬

Elvis doing one of my faves, Spooky Girlfriend. A girl onstage wearing some sort of Wizard of Oz costume. Who is she?

Elvis Roots I want you http://vine.co/v/hnYdgHrbiKd

The Roots and Elvis Costello just played "I Want You" with such intensity that no one will ever be in love again.

So ‪@theroots‬ and ‪@ElvisCostello‬ just blew s%^# up. Wow. ‪@questlove‬ is a monster of rhythm.

‪@questlove‬ That may have been THE most amazing, definitive rendition of I Want You ever performed in front of human beings.

I've seen ‪@ElvisCostello‬ do I Want You a lot of times with a lot of arrangements, but tonight with The Roots took the cake. Forever.

There are occasions when one requires a bullhorn. @ Brooklyn Bowl ‪http://instagram.com/p/eWLvLSEIki

Pump it up. Nuff said. ‪http://vine.co/v/hnYU1jEAvbH

I think i just watched the birth of an entirely style of music http://pic.twitter.com/iJZNGLI3xf

Spent the day hating myself for living in Brazil and not being able to attend the concert, but am now relieved to read that it'll be broadcast tomorrow via radio. Is anyone recording it?
Not only am I a big EC fan, I'm also a massive Diane Birch fan and for the past few years I'd been dreaming of a collaboration between the two. It's sort of surreal to see it happen, but I hope something bigger grows out of this small guest backing vocalist role.
Top

Assuming the stage setlist is accurate, I'm surprised they reprised only one song from Late Night With Jimmy Fallon ("Chelsea"). I was sure they'd do "High Fidelity."

And No Coffee Table wrote:Assuming the stage setlist is accurate, I'm surprised they reprised only one song from Late Night With Jimmy Fallon ("Chelsea"). I was sure they'd do "High Fidelity."

i could have sworn i heard GANGSTERS riff before it became GHOST TOWN...OUTRAGEOUS!!!!
I WANT YOU featured EC singing the intro; only saw FIONA sing it before tonight & definite riff before the main song began of THE BEATLES I WANT YOU!
PUMP included YEH YEH which i hadn't seen included live since 1989 i think it was.
I FOUND OUT is the JOHN LENNON killer punk rock track which i indeed correctly named as a PLASTIC ONO song....way cool. STELLAR SHOW!
sure hope the broadcast is the ENTIRE show. more tomorrow. A++++++++++++++
Top 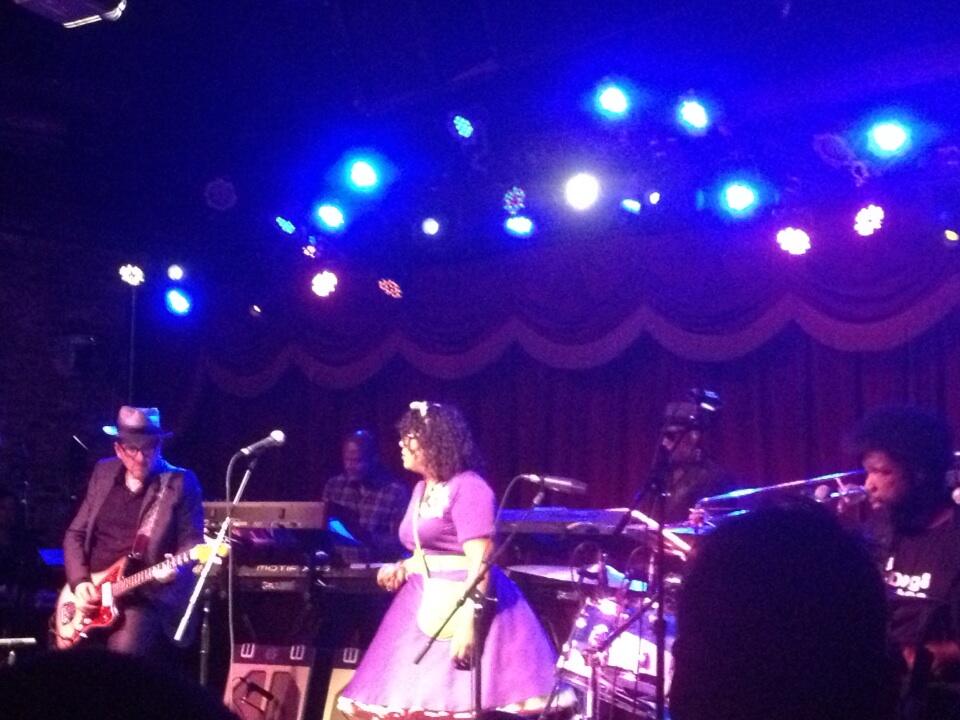 Users browsing this forum: No registered users and 90 guests