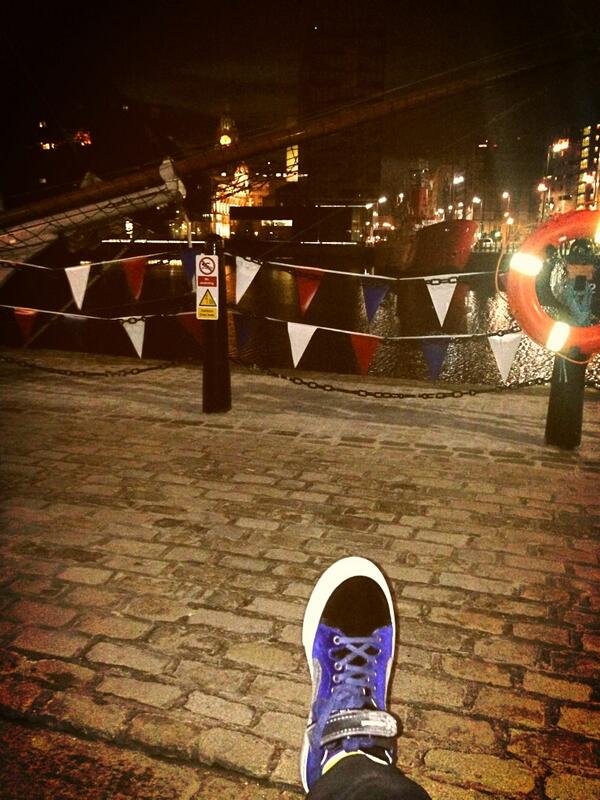 I asked Google, and it tells me that liver bird is the symbol of the city of Liverpool

Was it recently cleaned?

I'm not sure I get the "Walking On Thin Ice" lyrical reference either. Is it simply because he's walking?

The "Shoes Without Heels" reference is so obscure it took me a while to figure it out (I haven't listened to the KOA reissue in a long time):
http://www.elviscostello.info/wiki/inde ... hout_Heels

At first I thought the purple foot tweet was a haiku, but the first line has 6 syllables.

Questlove is a huge sneaker fan/collector. I'm surprised he hasn't commented yet.

Definitely a challenge to follow....but fun stuff that will only get better later this summer when the single is released, then the fall when the album and tour schedule are released!
Top

Elvis seems to be in Liverpool. Over the years I've seen him do shows there about this time of year, late June/early July. Both times he joked on stage about scheduling shows in Liverpool for that time to be there for his mothers birthday. Mrs MacManus will be 85 this year, going by Graeme Thomson's bio info., which says she was 24 when she got married in 1952 ie. born 1928. Doubtlessly there will be a big party for the occasion!
Top

Elvis has taken a photo of a foot, whilst looking North from the Albert Dock. You can see the same view in daylight (sans foot) here courtesy of Tripadvisor:

Now that we know WHERE his foot is . . . does anyone recognize the BRAND of shoe he is wearing? Can't make out the name on the velcro strap over the laces. Any guesses?
Top

No idea re the brand of trainers..... but just in front of them is Salthouse Dock which EC referenced in Red Cotton "...so picture the scene on the Old Salt House docks....".

Nearby is Tate Liverpool where Mrs Top Balcony is working today and on Costello Watch in case he's tempted by the Chagall exhibition.

My first thought was Puma, but I'm not totally sure.
Top

Anyone want to tackle this new series of tweets? In chronological order:

Pick all my pockets

Cut off these bracelets

Have you no remorse

Peel off your corsets
Of course

I'd be surprised if he'd wear anything so corporate as Nike.
It’s such a shame you had to break the heart you could have counted on
Top

docinwestchester wrote:Anyone want to tackle this new series of tweets? In chronological order:

EC is tweeting the lyrics to the sleeve designer.
Top

docinwestchester wrote:Anyone want to tackle this new series of tweets? In chronological order:

EC is tweeting the lyrics to the sleeve designer.

That's too obvious! I tend to expect the unexpected...
It’s such a shame you had to break the heart you could have counted on
Top

It's his new tribute song to Wayne Rooney (English soccer player, famous for a liason with a much old lady

)
The reference to corsets is defintely the clincher and it just sums up those boys in blue pn the Mersey , eh Colin TB and John ?