Elton John, ZZ Top, Christy Moore and Elvis Costello have been confirmed to play at next summer's Live at the Marquee in Cork.

John and his band are returning to play their Greatest Hits Show at the Marquee on June 23, while Moore is back on July 6.

Legendary rock band ZZ Top play their first Marquee gig on June 27, while Costello and his band play their Marquee debut on June 26.

A link will, I suppose, eventually appear here -

Aiken Promotions are delighted to announce the first Shows to be confirmed for next summer’s Live at the Marquee in Cork. The 9th year of the renowned Concert series sees Elton John and Christy Moore make welcome returns to play the Marquee while Elvis Costello and ZZ Top are confirmed to appear for the first time at the popular summer venue.

ELVIS COSTELLO & THE IMPOSTERS appear for the first time at Live At The Marquee on 26 June. The singer/songwriter who has penned classic tracks like ‘Alison’ and ‘Oliver’s Army’ has won numerous awards over his 40+ years in music. As well as being inducted into the Rock & Roll Hall of Fame, Elvis Costello was also named in Rolling Stone’s Top 100 Greatest Artists of All Time in 2004.

Anyone going? I just got a Block a Row a Seat 58. I take it that might be near the front as I do not know this venue. Flights and hotel to be booked.

Been to Cork many times but not in recent years. So will have to do some research re location of venue in relation to town.

Thats Sheffield,Liverpool,Southend (standing don't like seating even in my advancing years) and Cork. I an sure I will do more.
Top

Martin, my bro, is most likely going - I'm going to Westport

I was going to go to Derry the next day but it seems to be a bit of a trail to get there from Cork by Train ir Bus.
Top

Paul McLoone's radio show are giving away tickets for the Cork show all this week. He's ask a question about 10.30 each evening, you text the answer and a winner is announced pretty soon after.

Elvis is moving up the ad for Cork -

At least he's not moving down amongst the wines and spirits...
It’s such a shame you had to break the heart you could have counted on
Top

It'll be interesting to see if Elvis starts popping up on various media outlets here to promote the shows in Ireland. None are sold out so a emphasis on a ' walk up ' audience seems the only option. I will be going to the Westport show. I had all kinds of notions of also going to either Derry or Cork. That isn't happening. After the excellence of the Southend show I feel it would be best to focus on seeing and appreciating one festival show - otherwise it really would be just too much of a good thing!

By the way, Martin (the bro) was , at one stage,thinking of going to Cork. He isn't , having decided to catch the show next month in Barcelona.
Top

Sorry I will not see you in Cork or get the chance to meet Martin.

I am all checked in and ready for a sparrowfart start to tomorrow. Looking forward to a full Irish (plenty of B & W pudding) in the morning and a mug of Barry’s tea. Another front row seat so cannot wait.

The Marquee for tonight's show in Cork awaits Elvis
Top

Went down to the venue to have look before tonight and its 25 mins walk from the
Bus station in Parnell Square and what a walk , even a bright sunny Cork day
Its a bit sad as its at the back of the port area and you walk down through a industrial estate (fertilizer plant , power station , re cycling centre the site looks like a sunday car boot concrete hard standing, surely there must be somewhere greener in the very pretty city of Cork. Anyone remember the summer pops in liverpool same kind of tent but very much poorer location. Just a solitary security guard and me at 11 this morning so took a few pics through the gate.

So that's the pre amble , am sure the man as always will shine.

We are at Elvis Costello in the Marquee, it's all seated, no atmosphere at all, bit disappointed.

Never seen anyone play the theremin before! ‪#LATM13‬

‪@ElvisCostello‬ gives us the sirens for Watching the Detectives. http://‪pic.twitter.com/LtiZxXnfPF‬

enjoy the show all who are going. gonna feel weird seeing a regular setlist again.
Top

I shout 3 sons he sings it and points at me

Don't you love it when that happens? 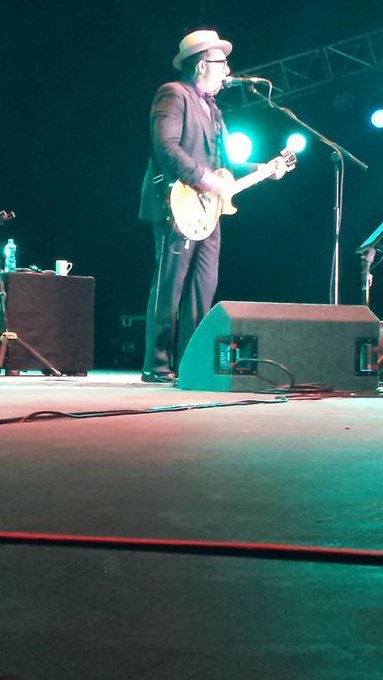