Thanks to Otis for highlighting this elsewhere.

Truthfully, I don't read much. I don't have the lifestyle to concentrate on great works of literature. People don't believe me when I say that and they think its an affectation. The two books I've chosen are both pictorial.

The first is called The Wonderful World Of Kahn, which is a compendium of plates commissioned by this man, Kahn, a French industrialist. In 1908 he set out with his chauffeur - I love that part of it, his chauffeur - to take colour frames, which was then a very new process. He went onto try and make a kind of inventory of mankind. He had connections in China and Japan, all over the world; he took pictures of French soldiers at leisure behind the lines; he sent a woman to the west of Ireland and photographed people in the Arans, away of life that has completely disappeared. He also put a camera on the Champs-Elysees and took pictures of people just walking around - the idea of not posing for a photo was completely new. These pictures are really shocking - they're from a time when you don't expect colours to be revealed, except in paintings. The shades of people's clothes are so much more extreme than you'd imagine. 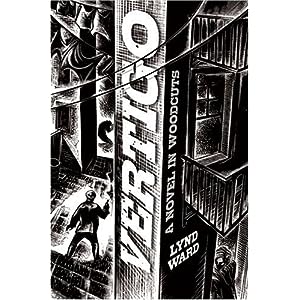 The other book is a collection of graphic novels made in woodcuts in the 1930s by a man called Lynd Ward. It's called Vertigo - three stories interlocking, set in 1937 in the Great Depression, about the lives and fates of a young girl, an industrialist and a young boy. Ward was very much of the left of that time; you might say his books are social and spiritual comment and he has a lot in common withother kinds of pictorial storytelling like William Blake. The beauty of the individual woodcuts is such that tiny details continue to reveal themselves every time you look. At the moment I really like I Like My Mice (Dead)by Mildred, a single on Third Man Records. I still like the idea of singles, when you just have that one record and that's as far as it goes. Mildred is a person, it would appear from the picture on the cover and that's all I know. Jack White produced it; it sounds immediate and it sounds beautiful. I love Mildred.

I also love the album En Couleurs by a group called Feufollet - the track I like in particular is Au Fond Du Lac. They're from, I believe, Abbeville, Louisiana; I met a couple of them this spring when I was playing Jazz Fest in New Orleans. There's quite a lot of traditional music down there - Cajun music - but what's interesting is they're young kids, so they've also got their own ideas. This sounds like a new kind of rock and roll. They sing everything in French - great melodies, three singers, accordian and everything- but there's also electric guitar. There's an artistry to it that enables them to step out from time and place and tradition. It's one of the most beautifully melodic records I've heard all year.

I really love A Canterbury Tale by Powell and Pressburger. It's a wartime film about a group of people who end upon a pilgrimage to Canterbury - a very, very loose connection to the Chaucer. It's a parable about loyalty and place, with Dennis Price in it and a number of other actors who were in all Powell's films. I love all their stuff - this one's in black and white, so it isn't as psychedelic as The Red Shoes or Colonel Blimp. In the story these soldiers are passing through an English town and there's this mystery crime going on - there's a man called The Glue Man who's putting glue in girls' hair during the blackouts, apparently to punish them for fraternising with soldiers. 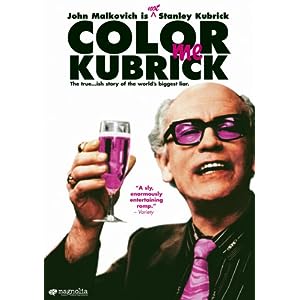 There's another really bizarre film I love too, called Color Me Kubrick, which I saw by accident one day, and I still can't make up my mind whether it's brilliant or awful. It's about a conman, I think it's a true story, who passes himself off as Stanley Kubrick - John Malkovich plays him. Because Kubrick was so reclusive not many people knew him personally, so this guy was able to ingratiate himself with various desperate showbusiness types. There s some hilarious scenes, not least- and this is the most bizarre, I watched it like "this isn't really happening" - when they go to a very camp and ornate party at a singer's house and the singer comes down the stairs serenading his guests in a white suit, this outrageously camp character.., and when the camera closes in, it's Jim Davidson! I have, to say the least, never been a fan. Perhaps there had been some sudden bolt of self-awareness about some of the homophobic lines he has uttered in his career, but I really couldn't have been more surprised if he'd come down the stairs in blackface. He's not playing it for laughs, either - he's playing it with real vulnerability.

Then It Leaves Us All Behind
Peter Wolf

LAFAYETTE — Elvis — Elvis Costello that is — loves the Cajun band Feufollet and their album “En Couleurs.”

“My dad was a huge Elvis Costello fan. I have all his stuff on vinyl,” said Stafford, who sings and plays accordion, fiddle and guitar for the four-man, one-woman band.

“I went to watch the Lil’ Band O’ Gold (swamp-pop locals) play at the House of Blues, in a tribute to Bobby Charles (recently deceased Louisiana songwriter),” he said.

“And Elvis Costello was playing Jazz Fest that year,” Stafford said. “And so, I’m standing there, watching the show backstage, and basically standing shoulder-to-shoulder with Elvis Costello. I’m just freakin’ out, right? But I was playing it cool.

“Luckily, my girlfriend has no problem talking to people,” Stafford said. “So he sings on stage and she comes up from behind him and hugs him and says, ‘Man, that was so awesome.’

“And he was totally cool with that and we started talking to him,” Stafford said. “And he said, ‘Oh, you have a band?’ So, after we talked a bit, he orders the album and I took it upon myself to e-mail him and he totally wrote back and said, ‘Hey, I ordered it and I’m waiting for it to come in.’

“And then, a couple of months later somebody posted on our Facebook ( me! JF) that he had written about our album,” Stafford said. “I was like, ‘Oh, my God!’ Since then, I’ve e-mailed him and he eventually wrote back. It was ridiculous!”

For the record, this is what Costello said, in part: “I also love the album ‘En Couleurs’ by a group called Feufollet. It’s one of the most melodic records I’ve heard all year.’ ”

Stafford and the group sing the 16-song album in French.
Top
Post Reply
3 posts • Page 1 of 1