From listserv (my comments)-

I thought tonight's show was even better than last night's show. Maybe front
row seats had something to do with it.

1. Red Shoes
2. All Time Doll
3. Either Side Of The Same Town
4. Veronica
5. Down Among The Wines & Spirits
6 New Amsterdam / You're Got To Hide Your Love Away
7. Good Year For the Roses
8. That's Not The ??? You're Leaving (said to be a new song)
(This? http://www.elviscostello.info/wiki/inde ... mall_Words)
9. Everyday I Write The Book
10. Bedlam
11. new song that is "sequel to previous" (new song presumably)
with lines:
Rains lapping on a window pane
....
One lonely bird is singing
.....
One bell is ringing
(This? http://www.elviscostello.info/wiki/inde ... ll_Ringing)

There was a policy of no flash and no video, so I got some photos without
flash, which I hope turn out. Also, the guy who was sitting next to me had
his son there who was a professional photographer and he took a few shots,
so I hope to be able to get a copy of these.

All the people I spoke to, really liked the show, even though some were not
huge EC fans. They thought that we showed what a showman and troubadour he
was (is).

In Suphur, at the part where he sings "pretty girls call my name and
paused", no-one did anything so I yelled out "Elvis" in a deep voice, which
drew lots of giggles. Elvis kinda cleans his ear out with his finger and
says,"Let's try that again". The second time seemingly all the girls in the
place cried out "Elvis". The drunk musician part of She Was No Good, was a
similar pattern.

Shelley Harland is winning a lot of fans on this tour, but only has singles
to sell at the stand, which she graciously signs at interval. I brought the
album Red Leaf in Mel and got her to sign it, and many people asked where I
got it. She could be selling a lot of those albums I believe. She is very
nice as well.

Elvis left the building without anyone spotting him.

johnfoyle wrote:22. All Or Nothing At All (yes, this is by Diana Krall)
(As in, I presume, the 1940's standard also recorded by Ms Krall?)

Diana first recorded this in '97. It's a staple of her repertoire.

johnfoyle wrote:8. That's Not The ??? You're Leaving (said to be a new song)
(This? http://www.elviscostello.info/wiki/inde ... mall_Words)

Maybe more likely it'd be "That's Not The Part Of Him You're Leaving"?
Top

Also, the guy who was sitting next to me had
his son there who was a professional photographer and he took a few shots,
so I hope to be able to get a copy of these.

including this ace shot - 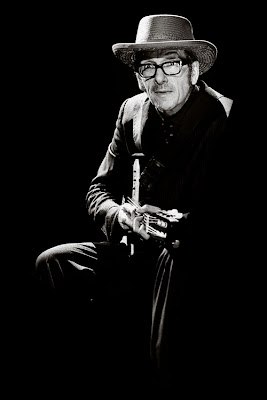 Did you miss what was said on Mornings today?

On Monday morning Tim Cox spoke to Susan Bowler a Hobart school teacher and winner of our competition to meet Elvis Costello on Sunday night. Tim then spoke to Mark Cutler, Music Journalist who was also was there to meet Elvis.

Tim Cox then spoke to Graham Sturges, Minister for Infrastructure on Flinders Island shipping and how he was to have a meeting at 9am to try to resolve the issue.
Top

Hey John,
I was in 2nd row in Hobart. I think your "Elvis call" in Sulphur was well done and fired up the gig a little. There was a guy in the first row who paraded in front of the stage several times (while EC was in mid-song) as he presumably went for a piss - I found that to be poor form. Hopefully not a friend of yours? I stayed at Wrest Point a couple of nights and while looking around Sat. arvo I unexpectedly stumbled on an unlocked door to EC's sound check. Much to my wife's embarrassment, I went in and watched for 10 mins or so. EC and sound guys didn't seem to mind, but someone from the hotel eventually asked me to leave. Strange to see him in jeans and hoodie, I thought his wardrobe only stocked suits. I also went to the Melb. show 10th and I'm off to Sydney show 15th. All good.
Top

No that person was certainly annoying to me also.

Hi John E.
I am just back from a few days in Sydney. Sorry, got your message too late. I was in F1-2. As always, I enjoyed the 3 shows I saw. Funny though most of the songs were well down the list of ones I would most like to hear, but still loved them. I have been a fan since 78 and often find that songs I did not initially gel with can turn out to be gems later on. Promised my wife to stay home and save money now, but just noticed Diana K is touring Feb/Mar..........
Top

I'm guessing this means no involvement for either Elvis or Diana in the musical festivities at the Olympics. She starts in NZ on the 18th, which probably means leaving a few days early. Olympics get going on the 12th - so chances are slim we'll see either DK or EC at Vancouver/ Whistler 2010. Given that their manager is Headline Talent Producer for the games, I was hoping we'd get a medal ceremony concert or two.

Users browsing this forum: No registered users and 64 guests