Glastonbury organiser Michael Eavis has confirmed more acts to appear at the festival this year.

Speaking to Jonny Walker on Radio 2, he announced that Elvis Costello, The Undertones and Van Morrison would appear, along with Brian Wilson and Kylie Minogue.

Eavis said that the 112,500 tickets for the event are expected to sell out in just six hours this year.

Was I right or was I right?
Top

OK, Martin - how about the six winning numbers for the lottery this weekend?
Top

I'm hoping to go to Glastonbury this year, which means that in the space of 6 months I'll have seen Elvis in Tokyo, NY and England. Does that make me an obsessive ? a stalker ?
Top

Fans have been promised a "festival to remember"
All 112,000 tickets for this year's Glastonbury music
festival have sold in less than three hours on Sunday
- a record in the event's history.
Fans rushed to snap up the tickets as soon as they
became available online and over the telephone at 9am
BST.
Top

I am extremely jealous.
Why are we racing to be so old?
Top


Hundreds of extra tickets for the Glastonbury music festival are to be put on sale on Tuesday.
This year's festival features acts such as Coldplay and Kylie Minogue.

The extra tickets, which will be available to Orange mobile phone users, follow rapid sales of the first 112,000 tickets, costing £125 each, last month.

A festival official told BBC News there would only be a "minimal amount" of tickets provided through Orange as one of the festival's sponsors.

"This is the same arrangement we've had with Orange for the last few years," he added.
Top

According to John E's site Elvis will be getting some BBC coverage
http://www.elviscostello.info/whatsnew.php

As John mentions , the BBC write up is pretty silly -

' Maybe not as well-known as the Elvis the prolific, and alternatively known as, Declan MacManus has still made his mark on musical history. Somewhat of a chameleon his music career began in punk-fuelled 1977 with his Stiff label debut 'My Aim Is True'.

Never one to mince his words he infamously described Ray Charles as a "blind, ignorant nigger". Despite the justification that he was trying to outrage some antagonists he was very unpopular in the US for a few years! Ironically his next album had a much 'blacker' style that took him into soul territory which was then followed by a pop phase.

Collaborations have seen him work with lounge god Burt Bacharach and the contemporary classical Brodsky Quartet. '


Rather unfair to mention the Ray Charles incident which even at the time was accepted as being at odds with Elvis's true beliefs. He has consistantly produced some of the greatest british albums of the last 2 and a half decades.I have seen him and the imposters twice recently and they remain one of the greatest live bands out there. He is a national trasure and we should all appreciate him and what he does.


A true legend. His range of music is awsome and a magnificent performer. I wish I was there to watch it. I hope the Beeb have it online.


Can't wait to see him next week, one of the TRUE greats! Whats with digging up the Ray Charles quote?? A 28 year career and thats it??

This may play havoc with the BBC4 show, as stage times are likely to be somewhat chaotic now.
Top

Where would Glastonbury be without the mud...
It’s such a shame you had to break the heart you could have counted on
Top

Elvis is due on stage at 6pm according to the print edition of this mornings Guardian, allowing plenty of time for a song or 2 to be shown on the highlights show at 9pm on BBC2. Elvis can look out at scenes like this. 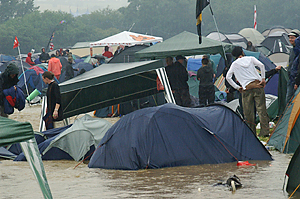 BBC South West just had a live report and an interview with Michael Eavis. The reporter complained that the background noise was deafening - I didn't mind it as it was "Less Than Zero".
Four eyes - one vision
Top

Full half hour of Elvis on BBC4 from 8.30.
Highlights on BBC2 from 9.00 hosted by Phill Jupitas so Elvis is sure to be on there too.
Just seen the beginning of the BBC3 coverage with Elvis playing live in the backgound. Fatboy Slim said something about wishing he was outside watching Elvis but the 2 young trendy presenters didn't seem so impressed complaining that EC had been on for too long.
Top

Incredibly a portion of this performance is already being torrented here.

The BBC 2 prog. at 9 showed Olivers Army - everyone seemed to be having a good time.
Top

Under the grey skies of the Pyramid stage and looking a little bit like a favourite casino host, Elvis Costello, a king of sorts, fell short of this immortal act with a splurge of tangled, ironic knots from his guitar.

'(What's So Funny 'Bout) Peace, Love and Understanding?' This is the way that any great rock n' roll legend should be addressing a Glastonbury audience in 2005, but then Elvis Costello and the Impostors are not just any old rock n' roll legends. These songs have in them the questions that are right under our noses, but amid their showmanship they're musicians who don't claim to know the answers.

Thundering into a gritty rendition of 'Radio, Radio' they anticipated a gig that was to be a fine retrospective of Costello's early stuff complemented by tracks from his current Delivery Man album.

Wielding a vintage Hofner style jazz guitar Costello's visions of the world, displayed in tracks like 'I don't want to go to Chelsea', remain no less jaded than they used to be and the band delivers in the manner of an out of place dancehall outfit.

Original Attractions Keyboardist Steve Naive played the pop stars crime of self mockery with a twist of shameless pizzazz. At times his laboratory of analogue synths, wobbly Theremins and fuzzy noises appeared like a ghost out of the BBC Radiophonic Workshop.

On the whole the Costello band just got on with toughening up the old ballads but, at times, he took away his mask of self-possessed grandeur. With its stab at the old British Empire 'Oliver's Army' seemed a helpful reminder of this years Make Poverty History campaign. "Tonight…" he said to the audience, "…the monkey man, through me, will talk to the people of Glastonbury again..." Tailing off with a strong but floundering whiff of the American national anthem, we were left with very suspicious minds indeed.

Time was getting on however and we had to rush to the Pyramid Stage to see another Declan.This was Declan McManus, better known as ELVIS COSTELLO.He was brilliant, the second best act in my opinion all weekend.I have seen Elvis several times previously but this time he was terrific and delivered a greatest hits show,you name an Elvis Costello song and he did it.His band were excellent with the drummer and the keyboard player deserving special praise.My favourite songs of his set were'A Good Year For The Roses' and 'Whats So Funny Bout Peace Love And Understanding?".Elvis really tried his hardest to please the crowd and lift their spirits after the horrible weather they had endured. I didn't think i'd hear another band as good as Elvis and the Imposters that day so we returned to our nice dry campsite on the higher ground for the rest of the evening.

Although the festival takes place only half an hour's drive from my
home, I
gave up attending it in the 90s. I'd like to say this was a noble
personal
protest against the event's drift towards the mainstream - but really
it was
more to do with being unable to endure the hideous toilet facilities on
offer. These days, I settle down with my pipe and slippers and a copy
of the
Radio Times for my own armchair festival.

Coverage on the BBC is erratic, to say the least. They seem to have
perfectly replicated the feeling you get when you're a guest in
someone's
house and their hyperactive channel-surfing kids have command of the TV
remote. Thus last night a cracking set from Bloc Party was just
building
nicely when we were whisked away to the terminally dull grey world of
The
Doves. Similarly, it was impossible to focus on the lovely orange dress
worn
by the sax player in The Zutons (the other highlight act of the night
for
me) for more than a couple of songs at a time before being hauled away
for
another report on how the weather had "failed to dampen the spirits" of
the
"revellers".

BBC4 screened a mostly uninspiring half an hour from EC & The I's
coveted
6pm Friday slot later in the evening. To be honest, he just seemed old
and
in the way, the band sounding square and fossilised compared to acts
like
the incendiary White Stripes and a great DJ set from Norman Cook
(featuring
3D glasses on the TV cameras, or something). Most of the crowd shots
during
EC's set showed people obviously hoping it would all be over soon and
that
they could get cracking with some bands they actually gave a damn
about. One
of the presenters earlier in the evening had groaned that Costello
"seemed
to have been playing for three days" and it was difficult not to
sympathise
as he ground his way through mediocre versions of his greatest "hits".

A bit sad, really. Maybe the Imposters just don't work as well in an
open-air festival setting as they do in a sweaty little Memphis club.
Fact
is, they just seemed plain wrong at Glastonbury.

I've seen the EC, White Stripes, Fatboy Slim and Kaiser Chiefs performances from Glastonbury, and agree that EC looked out of place in comparison.
Where's North from 'ere?
Top

Elvis is doing a lot of festivals this summer so we can expect pretty much of the same greatest hits interspersed with songs from The Delivery Man ie the (not-now-so) new album.

The difficulty is that for these types of show when he's not headlining then he's going to play the songs people know. There's little point in pulling out a song like [insert obscure album track/b-side] as the audience will not be interested.

(a joke there for you Irish folk!)
It’s such a shame you had to break the heart you could have counted on
Top

Will be interesting to see if he goes for a more typical setlist for this tour at Cornbury, where he is headlining, and the competition is Steve Harely and a ukulele orchestra, so it's a fair bet that a hefty quota of EC hardliners will be there, like the Westinghouses (well, one of them, anyway).
There's more to life than books, you know, but not much more
Top

I think there'll be a big difference in the setlist if he's headlining as opposed to just being on the bill. If he's playing for two hours as a headline act he hasn't got enough greatest hits to fill it!

It'll be interesting to see the Kenwood House setlist - that might give some indication.
It’s such a shame you had to break the heart you could have counted on
Top

I agree that next to the White Stripes Elvis seemed like a bit of a dinosaur - never thought I'd say that!

Those guys are currently displaying the lightning-charged inspiration that Elvis and the guys displayed in This Year's Model.
Top
Post Reply
36 posts