'How do musicians' memoirs really fare in a crowded market?'

'Elvis Costello’s Unfaithful Music and Disappearing Ink (Penguin/Blue Rider), a critical darling, has started out of the gate slowly with about 40,000 copies. '

I think this posts says that a edition of Elvis's book is coming out in Italian in - you guessed - Italy on May 19th.

Memoirs from musicians Patti Smith, Elvis Costello and Grace Jones have been longlisted for the second Penderyn Music Book Prize, while biographies of John Peel, Sandy Denny and Tubby Hayes have also made the list.

The shortlist will be revealed in March. The winner will be announced at the Laugharne Weekend Festival on 3rd April 2016 and will receive £1000 and a bottle of Penderyn Single Cask single malt. 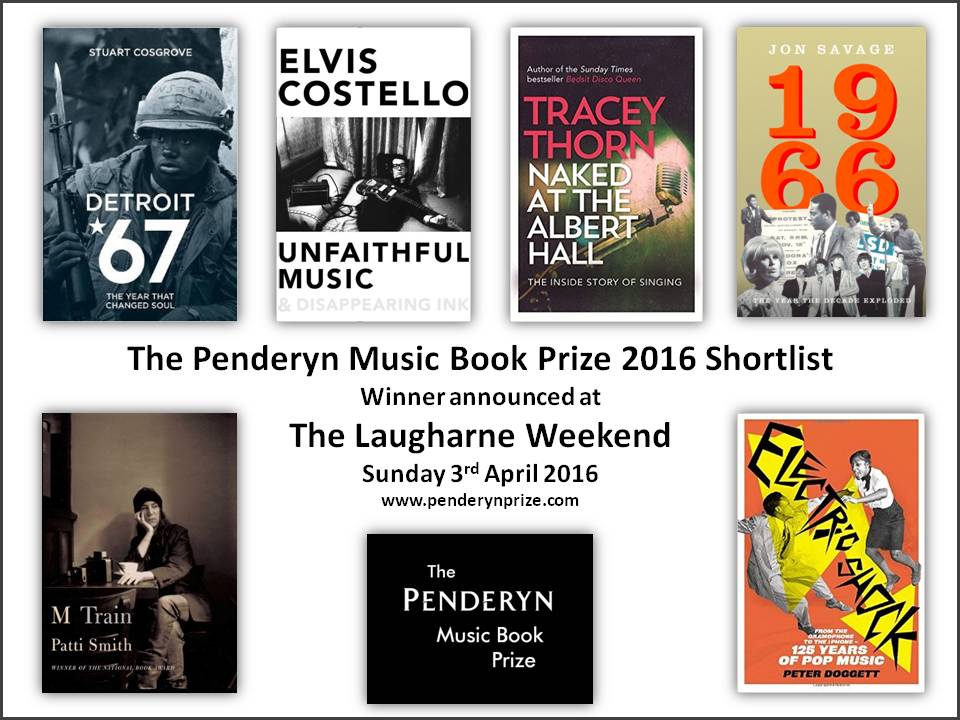 Memoirs by Patti Smith and Elvis Costello have been shortlisted for the Penderyn Music Book Prize, the only UK-based book prize specifically for music titles.

Joining Smith’s M Train (Bloomsbury) and Costello’s Unfaithful Music and Disappearing Ink (Viking) on the shortlist is Electric Shock: From Gramophone to the iPhone – 125 Years of Pop Music (Bodley Head) by Peter Doggett, 1966: The Year The Decade Explored (Faber) by Jon Savage, Detroit 67: The Year that Changed Soul (Stuart Cosgrove) by Stuart Cosgrove and Naked at the Albert Hall: The Inside Story of Singing (Virago) by Tracey Thorn.

Richard Thomas, the prize founder, said: “It was an incredibly strong and varied longlist which went from traditional biographies to specific years, to songwriting royalities and the joys of working in a record shop. I read and enjoyed all the books and was very relieved that I did not have to be a judge.”

Stuart Maconie, broadcaster and judge, said: “It was great music writing almost as much as great music that inspired me as a teenager and made me want to write myself. In Britain, we can rightly boast of some of the finest writing in this field in the world; not just scholarly and learned, but witty, impassioned and insightful. The Penderyn Prize is a very welcome celebration of this.”

The winner will be announced at the Laugharne Weekend Festival on 3rd April 2016.
Top

Elvis didn't win the above, Jon Savage did.

Is it just my copy , or has anyone else's copy of the UK edition of Elvis's book yellowed rather quickly? I'm careful enough in storing books , out of direct sunshine etc., not that there's been much of that since last October . I wonder if the recycled nature is a factor, or is it a meant to be a ongoing feature, a extension of the 'disappearing ink ' concept? Thanks Elvis, how hilarious...

Maybe the next print run will "pre-age" the book, like the pre-aging on the Get Happy!! album.

My copy is ok but I bought mine a week after you so I'll check it again next week!
It’s such a shame you had to break the heart you could have counted on
Top

My copy of the U.S. edition , with it's thinner, finer paper , has not discoloured.

No note about saving the rain forests , just this curious statement I hadn't spotted before

' You never know who or what he'll run into on the next page. Elvis Costello will keep you reading to find out. '

... The idea seems to be that the unfaithful music (like not letting us have the last 7 or so live '1st-timers' from 'A Face In The Crowd) and disappearing ink disapparates into forgotten transmogrification, it seems ...

My UK bought on issue/£4 off at Waterstones HB has not yet yellowed - I have read it only once/will not bother again with it till web-index appears ...

Apart from checking its yellowing/book-worm etc condition ...
'Sometimes via the senses, mostly in the mind (or pocket)'.
Top 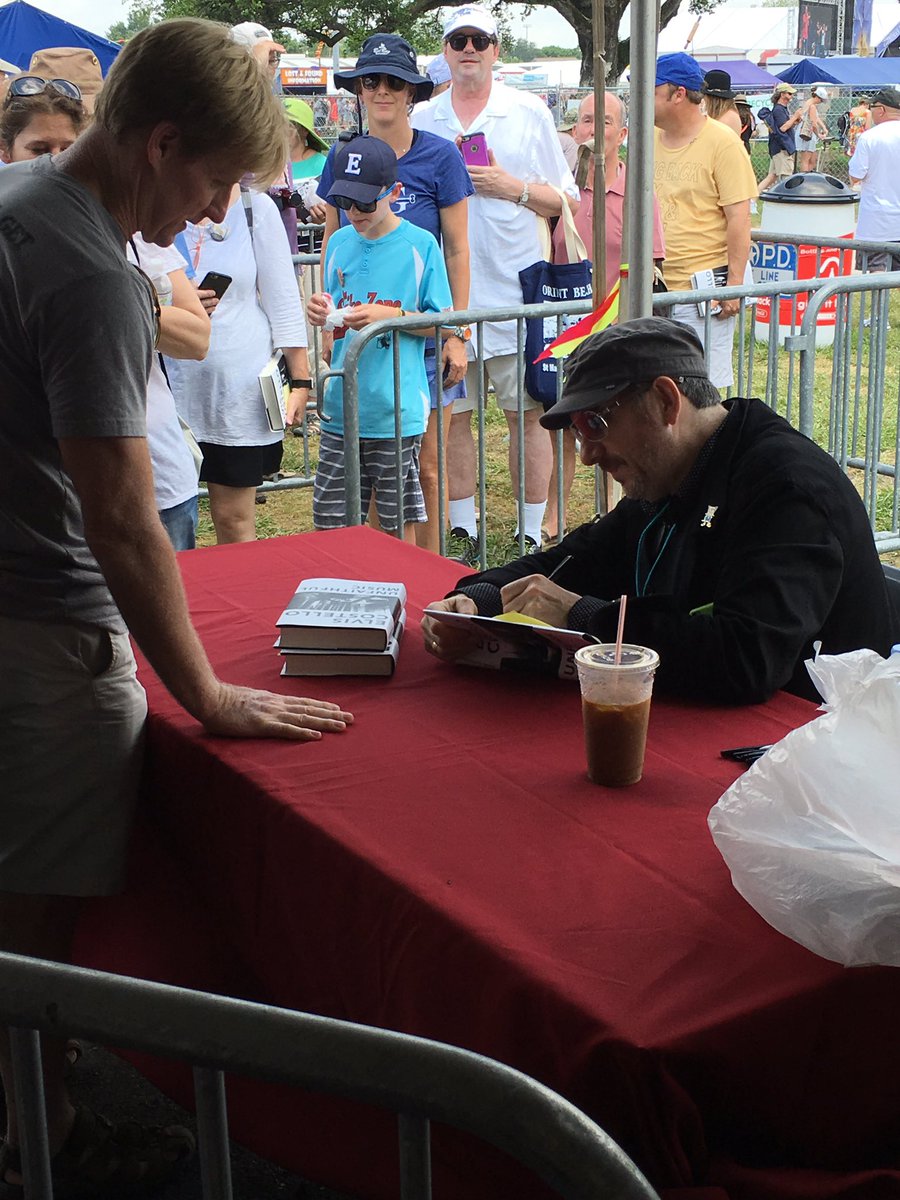 At the New Orleans Jazzfest yesterday. 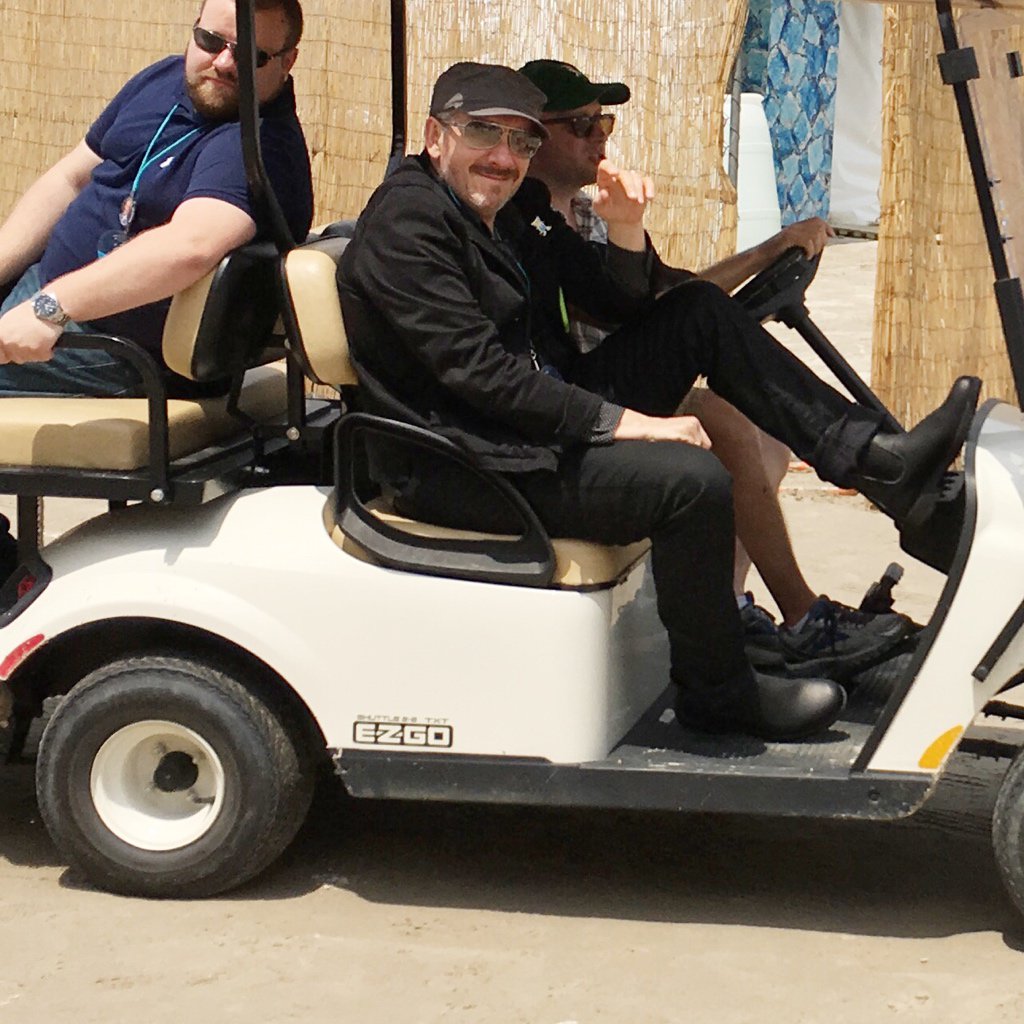 Swedish translation apparently due in August this year
http://www.adlibris.com/se/bok/skamlos- ... 9113054766

The paperback edition of the book came out in the U.K. yesterday

Funny as I saw it in Waterstones in Orpington on Bank Holiday Monday.

I didn't buy a copy. I was looking at John Lydon's Anger is an Energy book though.
It’s such a shame you had to break the heart you could have counted on
Top

The only named reviewers , out of dozens of quotes , are Mark Billingham , Nick Hornby and , er, Jonathan Ross .I don't think we were graced with something in print from Wossy so I guess that's from his introduction when Elvis appeared on his chat show ( along with some 'talent show ' winner who demonstrated his ability to peel a banana with his feet. )

Graeme Thomson's ( one time EC biographer) review for the Mail on Sunday is quoted twice. I told him of his anonymity he commented 'Ha ha! Some karmic circle being completed, I think...'

'Bah!' was Terry Staunton's response when I told him his thoughtful review for Quietus is similarly attributed merely to the publication.
Top

krm wrote:Swedish translation apparently due in August this year
http://www.adlibris.com/se/bok/skamlos- ... 9113054766

The publisher eMails me and informs that there will be no promotion activities for the Swedish release. Or in simple wording "Elvis will not come".
Top

I finished the book about ten minutes ago. I took the opportunity to buy it and read it on the occasion of a minor but painful surgery. It hurts to laugh.

Elvis moonwalks through his life with the elegance of dust revealed by an afternoon sun ray through dirty green glass panes set in grey wood with still-clinging patches of chalk-white paint attached in a cracked and random pattern.

It's funny because it requires perusal. No one can skim this thing and get much out of it. In a way it is written much the same as the raconteur old guy might spill...oddly, randomly, as it comes up, and O yeah that's how it was. It's much the same as everyone remembers their own life, willy-nilly as the memories float to the top.

But, it's more than that, it's a chronicle of a certain time. Elvis has become an eyewitness historian. I keep thinking, when all these great pop musicians are dead and gone books like this and shows like Spectacle will be open documents for future generations. All these musical and theatrical heroes, and Elvis seems to have met them all. Now he's the expert.

Hopefully, this will keep the future from becoming too lame.

I picked up the Detour DVD and I'm getting ready to watch it. The tour came close by me a couple of times, but you know, life of a ragged claw.

I've never been happier to be a fan.

In a way it is written much the same as the raconteur old guy might spill...oddly, randomly, as it comes up, and O yeah that's how it was.

Exactly. Like someone bending your ear in the pub.
Top

Or at an Elvis gig

The Italian edition seems to be on sale -

My copy has a weird defect. The last 150 pages or so are out of place, so that the final chapters appear about 2/3 of the way through the book.

All the content is there, just out of order. I trust that in 100 years my descendants will be able to cash in on Antiques Roadshow.

I could have done without all the family history myself. This seems to have been absolutely integral to EC's conception of the project, but personally I have little interest in his grandparents and ancestors; he'd have been better to have done the research and written it up as a private resource for his kids. Alas, it seems typical of EC to freight up his work with such excess. Apart from that structural flaw, the book is most enjoyable, and at times even movingly eloquent (my favourite being his evocations of his courtship with his first wife).

Without having read all the rock memoirs out there, my guess is that the book warrants a runner-up status in the 'rock memoirs sweepstakes,' behind Dylan's Chronicles. In fact, it's interest to compare the two. EC's is elaborate, even bloated, in the tone of a likeable man, expansive but slightly professorial and diligent fellow. He attained success, clearly, by earnest effort, the sweat of his brow. Dylan's is more bemused, leaner, and elusive. Its structure is tautly brilliant and its voice compellingly distinct. You learn many more facts from EC's book, but Dylan's book is like the man's art itself, ultimately of a higher order of sheer inspiration. This is not a criticism of EC. Like I say - it's an interesting contrast.
When man has destroyed what he thinks he owns
I hope no living thing cries over his bones
Top
Post Reply
527 posts

Users browsing this forum: No registered users and 26 guests