First of all - roll call!

Secondly are there any suggestions for a meet up?

Me and Goon Squad should be there about 6pm.
It’s such a shame you had to break the heart you could have counted on
Top

I’m there with bells on! Would love to hook up for pre gig beer. Not sure where though. I’m in Southampton all afternoon catching up with Mr. and Mrs. Getgood senior so will keep my eyes peeled for suitable watering hole.
I love you just as much as I hate your guts.
Top

Should be getting there about 4ish traffic and weather permitting!
Top

Me and the bh will be there, planning to arrive before six and grab a McD or sonething quick to eat.
signed with love and vicious kisses
Top

I’m sat in Mayflower Village pub to left of the theatre as you look at it. Gusto is very noisy with little room. It’s quiet with plenty of room here at the moment...
signed with love and vicious kisses
Top

Bummed to see he's still using those video projections. They're lame, and distracting as fuck.
Top

It was a good show and the first time I have seen the ladies, who I feel added a great deal. They also took the strain away from elvis' voice.

Elvis's voice was pretty good on the whole but during the softer songs his voice really struggled. In American Without Tears his voice was very bad but to be fair, even Elvis knew this. He joked about how emotional he got when he was in Southampton.

I liked the distracting images as they added colour and some were very clever.

The sound was excellent.

Davey went straight into the bus but Elvis, Steve and Pete were very chatty.

There was a great forum collective there so I'll let them report in case they think I'm stealing all of their comments!
It’s such a shame you had to break the heart you could have counted on
Top

Good show, voice mostly good apart from the choke on AWT. Similar photos to those already posted are available on my fb but taken from the front row by mrs solack. If you are a fb friend then yoiu know where to go.
signed with love and vicious kisses
Top

There was a great forum collective there so I'll let them report in case they think I'm stealing all of their comments!

Any news about ‘the unprecedented new release based on one of EC and the Atractions most celebrated albums’? Or about ‘A Face In The Crowd’?
Since you put me down, it seems i've been very gloomy. You may laugh but pretty girls look right through me.
Top

Elvis mentioned all the players Liverpool had stolen from Southampton after American Without Tears but managed to forget to mention how absent both Van Dyke and Lallana were against ETford. Perhaps playing Turning The Town Red has started a 13 match losing sequence. I’ll remind all you footie fans - only 1 Invincibles - The Arsenal !!
Top

There was a great forum collective there so I'll let them report in case they think I'm stealing all of their comments!

Any news about ‘the unprecedented new release based on one of EC and the Atractions most celebrated albums’? Or about ‘A Face In The Crowd’?

I didn't hear anything although I doubt he'd spill the beans! Even to me!

I was delighted to get a point at and smile during Pump It Up whilst I was standing from Kitten and to get looked at by Elvis whilst my shoulders were dancing during Detectives!
It’s such a shame you had to break the heart you could have counted on
Top

My setlist from a very reliable source (!?)

I Thank You !
Top

The last time Elvis Costello was in the news, 18 months ago, he was saying he’d had an operation to remove a ‘small but very aggressive cancerous malignancy’. Seeing him in action now, you’d never know it.

He plays for two hours without a break, and tears into the faster songs as if it was 1979 all over again.

A brush with mortality can send a man hurtling back to his heyday. At 65, Costello has had his bus pass for a while, but the songs he is playing on the Just Trust tour were mostly written when he still had a young person’s railcard.

To be a teenager then was to hang on his every word, and there were a lot of them. The young Costello burst out of Liverpool and gave verbosity a good name. Watching The Detectives and Oliver’s Army have never gone away, and tonight they’re joined by overshadowed siblings such as Green Shirt and High Fidelity, which have just as much bite.

Costello is a genial host, cracking jokes and saying he loves Southampton because ‘you send all your best players to Liverpool’. But he can still summon his old truculence for (I Don’t Want To Go To) Chelsea, his tenderness for Alison, his tortured lust for Pump It Up, and about six emotions at once for Accidents Will Happen.

Unwanted Number, from last year’s Grammy-winning album Look Now, is one of only two songs from the past 35 years, but there are two more from the future. Costello has been working on a musical, an adaptation of Elia Kazan’s 1957 film A Face In The Crowd.

The two tasters make a warm interlude, as his roof-raising backing singers, Briana Lee and Kitten Kuroi, gather around the piano.

Words, of course, are not enough. Costello’s classics are also memorable pieces of music. As he plays rhythm guitar – with his old mates Steve Nieve on keyboards and Pete Thomas on drums, and his newer mate Davey Faragher on bass – you realise that the whole band is a rhythm section, pressing home those punchlines. 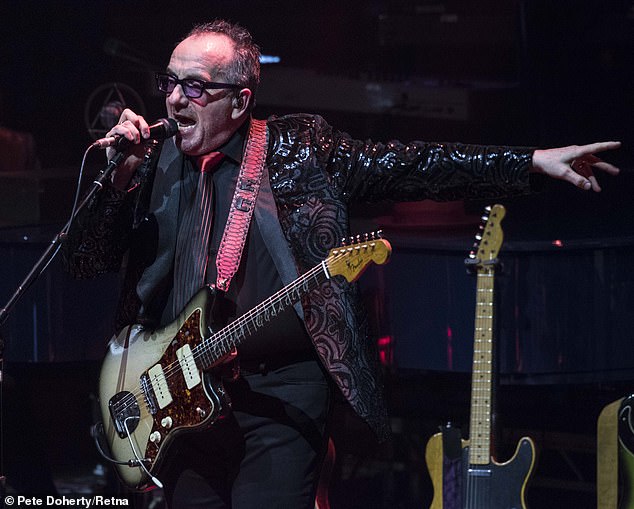 I had to look up the meaning of "purple patch." I never heard that before. What's the origin?
Top

docinwestchester wrote:I had to look up the meaning of "purple patch." I never heard that before. What's the origin?

No idea -
I'm guessing that Purple is associated with royalty and more especially Imperialism and that was because the cost of the dye used to make anything purple was inordinately expensive - I think !
Top
Post Reply
18 posts • Page 1 of 1

Users browsing this forum: No registered users and 75 guests