EC and The Imposters join Blondie for this show at the Santa Barbara Bowl, in Santa Barbara, CA on August 7, 2019.

Clicking through from the venue website takes you to biographies for EC and Blondie. This is the EC bio - even older than many that still appear these days:

"Elvis Costello has followed his musical curiosity in a career spanning more than 28 years. He is perhaps best known for his performances with The Attractions, The Imposters and for concert appearances with pianist, Steve Nieve. His recordings include 'This Year's Model', 'Imperial Bedroom', 'King of America', 'Blood and Chocolate', 'Spike', 'All This Useless Beauty', "When I Was Cruel", "North" and "The Delivery Man'. However, he has also entered into acclaimed collaborations with Burt Bacharach, The Brodsky Quartet, Paul McCartney, Swedish mezzo-soprano, Anne Sofie von Otter, guitarist, Bill Frisell, composer, Roy Nathanson, The Charles Mingus Orchestra and record producer and songwriter, T Bone Burnett.

During his career Costello has received several prestigious honours, including two Ivor Novello Awards for songwriting, a Dutch Edison Award with The Brodsky Quartet for The Juliet Letters, the Nordoff-Robbins Silver Clef Award, a BAFTA for the muill asic written with Richard Harvey for Alan Bleasdale's television drama series, 'G.B.H.' and a Grammy for 'I Still Have That Other Girl' from his 1998 collaboration with Burt Bacharach, Painted From Memory.

Elvis Costello and The Attractions were inducted into the Rock & Roll Hall of Fame in 2003. During the same year he was awarded ASCAP's prestigious Founder's Award. There have also been a number of Grammy nominations for his recent albums When I Was Cruel and The Delivery Man.

In 2004 Costello was nominated for an Oscar for Best Song 'The Scarlet Tide", sung by Alison Krauss in the motion picture, Cold Mountain. The song was co-written with T Bone Burnett.

The River In Reverse was recorded in two weeks and produced by Joe Henry. Sessions began at Sunset Sound, Hollywood and concluded at Piety Street Studios in New Orleans. It is thought to be one of the first major recording project to take place in the city since the Katrina disaster. The album will include renditions of a number of songs from the Toussaint catalogue, including "Who's Gonna Help Brother Get Further?" and "Freedom for the Stallion".

The title track is one of the recent Costello compositions to feature a characteristic Toussaint horn arrangement. "Ascension Day" is Toussaint's beautiful minor key variation of Professor Longhair's "Tipitiina" with new words by Costello, while "International Echo" is the work of both songwriters."

Who's going to this show? 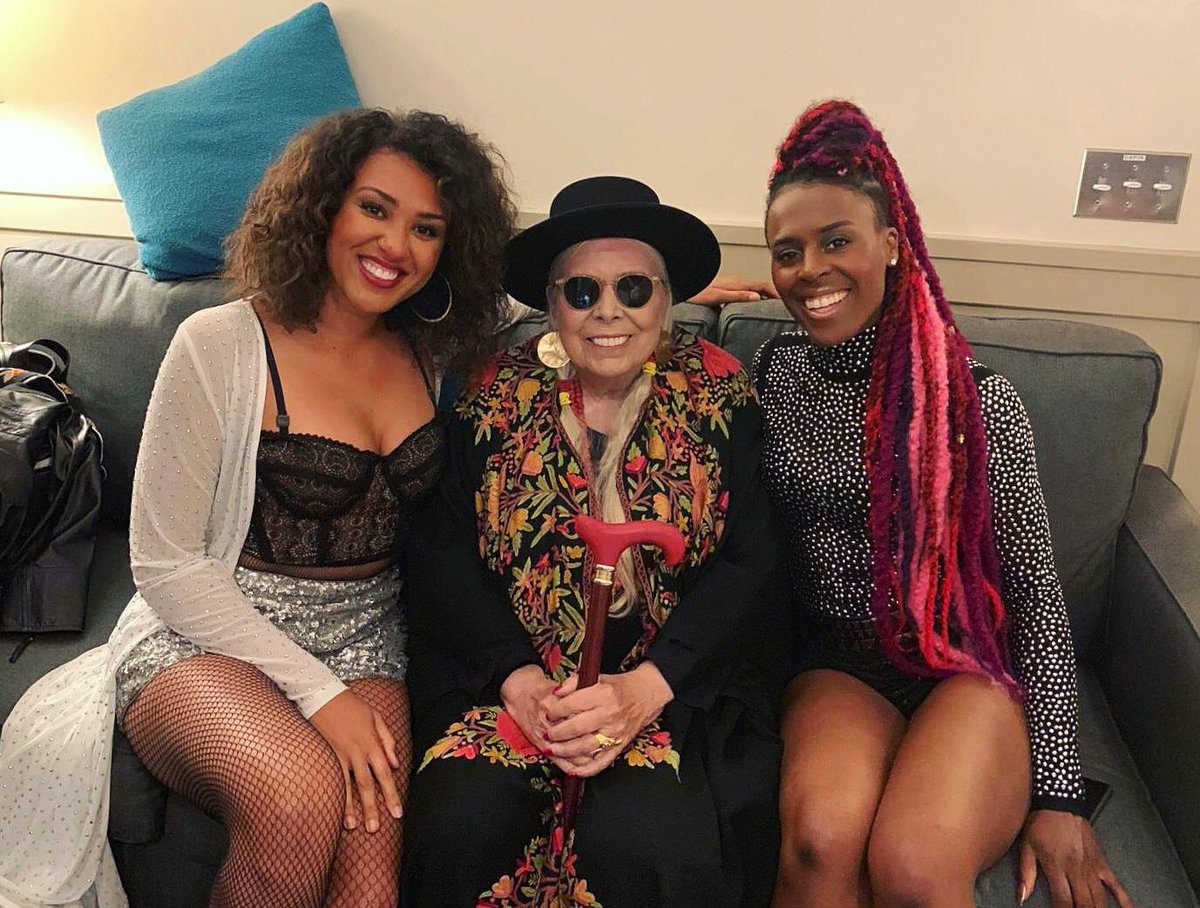 Kitten Kuroi: "Seriously, this tour has been incredibly inspiring beyond imagination on so many fronts. Today, synchronicity brought us Joni Mitchell, the legend who's "Shadows & Light" live album was filmed and recorded on the very hallowed space in which we performed this evening. @brianadlee hipped me to the record and we listened to it for a while backstage. At one point, alone, Briana spent time just soaking in how sacred this space was, as she grew up with that Joni Mitchell album. However, it wasn't until just after soundcheck when Elvis told us she was going to be a guest at our show that the full circle, transgenerational moment became real. We got the chance to meet her and after the show, she looked me square in the eye and told me we moved her. I'm floored. I'm honored. It was so surreal. Thank you, Toasty & @elviscostello for making this beautiful moment happen."
Top

It’s the first time these artists have toured together, and they make an effective pairing, in part because they don’t follow the co-headlining practice of switching off who opens and who closes. Blondie starts the party with a danceable, reggae-tinged set, and Elvis Costello delivers a harder rocking finish. At the Santa Barbra Bowl on Wednesday, August 7, sunset provided an awesome ambient lighting shift to underscore the contrast.

Debbie Harry sported a lightweight silver hooded coat and matching reflector sunglasses. Guitarist Tommy Kessler added spark to a lineup that included original members Chris Stein and Clem Burke. Blondie’s set wove their biggest hits together with a cleverly chosen handful of covers. “Rapture” segued into “Old Town Road” by Lil Nas X, and “The Tide Is High”—which is itself a cover of the Paragaons, but was a bigger hit for Blondie—included an interlude of Deee-Lite’s “Groove Is in the Heart.”

Elvis Costello came out blazing with “Pump It Up,” his standard opening song, followed by three of his best shots from the period 1979-80, “Clubland,” “Green Shirt,” and “Accidents Will Happen.” A pair of co-writes, with Burt Bacharach and Carole King no less, represented his most recent album, 2018’s Look Now, and at the midpoint, Costello took to the piano for a preview of a Broadway musical he’s writing based on the 1957 Elia Kazan film A Face in the Crowd. Later in the set, he made a shout-out to a real life face in the crowd, Joni Mitchell, who he said was in attendance, and the audience roared in approval.
Since you put me down, it seems i've been very gloomy. You may laugh but pretty girls look right through me.
Top