“Cruel To Be Kind”: book about Nick Lowe

“Cruel To Be Kind”: book about Nick Lowe

Best known for his pop standard “Cruel to Be Kind” and his pensive anthem “(What’s So Funny ’Bout) Peace, Love, and Understanding,” Nick Lowe remains a bit of an enigma. He’s a hard-working, ceaselessly inventive songwriter and a first-rate musician, but his records come and go with little fanfare even though they reach a loyal and adoring fan base.

British journalist Will Birch, who’s known Lowe for over 40 years, takes note of that in his new biography, Cruel to Be Kind: The Life and Music of Nick Lowe (Da Capo). “Why isn’t Nick Lowe more well-known? Why does he remain a cult-throb, singing only to the choir and maybe a couple of stragglers in the churchyard? Why haven’t any of his recordings this century scraped even the lower reaches of an album chart? Why, in the UK, has he been unable to fill modest venues in the provinces?”

Although Birch poses these questions, he doesn’t attempt to answer them in a direct way, content merely to let his reflections on Lowe’s music and Lowe’s own words tell Lowe’s story. Birch also draws deeply on interviews with Lowe’s friends and bandmates, allowing them to tell us why they admire him. Carlene Carter, Lowe’s former wife, declares: “He is a great songsmith. He taught me so much about writing songs. Not actual teaching, but being around him and with him, I learned a lot about the sound of words, the percussive quality of syllables.” Chrissie Hynde says that as a songwriter “he’s one of the greats, and I’d put him up there with the rest of the great songwriters. There aren’t that many … Neil Young, Bob Dylan, Lucinda Williams, Ray Davies … I’d put Nick up there with them.” Huey Lewis says he “hopes [Lowe] lives and writes songs forever. He’s a treasure, a real authentic songwriter.” Ry Cooder, longtime friend and collaborator, rates Lowe “as a real songwriter, and that’s the reason he is a good musician and fun to work with. He plays the song, not just the notes, and his bass-player timing is the best. … Nick and myself — we’re of a generation lucky to come up in the happy golden age of pop songs: intro, verse, chorus, half an instrumental verse, chorus, and out; things we took to be an integral part of life, but gone now for the most part.”

Although Birch traces Lowe’s story in straightforward fashion — from his childhood listening to Tennessee Ernie Ford (“I had no idea it was country and western, but it was very strange, California country and western with all these jazz influences, fabulous music. I still love it.”), Elvis, and Lonnie Donegan to Lowe’s early gigs with the band Brinsley Schwarz and their opening for Van Morrison at the Fillmore East, his marriage to Carlene Carter, and his friendships and musical partnerships with Elvis Costello, Dave Edmunds, and Graham Parker, among others — the life story is not the main attraction in Cruel to Be Kind.

The best parts of Birch’s book reveal Lowe’s thoughts on songwriting. Lowe’s first theory is that “he might be waiting for inspiration and someone visits, unannounced.” Lowe knows only that the person is a really good songwriter “and they want to perform one of their songs. They show him a couple of their efforts and they are really good. Then the person disappears … if there’s no sign of them after a month or two, he will know their songwriting so well that he can do a pretty fair approximation of it — close, but not quite as good. All his best stuff is therefore, ‘written by someone else.’” Lowe’s second theory involves listening. He hears the sounds of a radio station playing through the walls of his apartment: “One day the station will programme a great new song which he can hear through the wall clearly enough, but it’s over before he can learn any of it. Knowing they might play it again at any time, he keeps a notepad ready so that with each play he can capture a little more of it, until he’s got it all.” As Lowe says, “It’s more of a listening process than anything else. And when I’m looking at a song that I feel I’ve had nothing to do with, a cover effectively, it’s finished.”

Cruel to Be Kind may be the closest we ever get to a memoir by Lowe, given his own reticence to talk about himself in a broader way and to be a self-promoter. Fans of Lowe will love the book, and Birch offers a colorful introduction to Lowe and his music, steering us to pick the music and give it a spin. 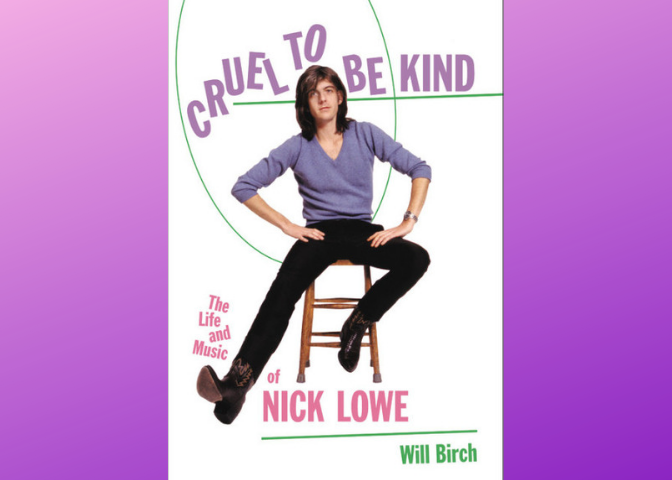 CRUEL TO BE KIND
by Will Birch

Solid, occasionally hagiographic life of the British musician who helped pub rock evolve into punk, New Wave, and beyond.

Nick Lowe (b. 1949), writes Mojo contributor and musician Birch, is “simply peerless,” a musician’s musician whose songs have been recorded by the likes of Elvis Costello, Tom Petty, Johnny Cash, and Rod Stewart. He is also an international man of mystery and renowned toper who, while now calmed down at age 70, would put the fear in Keith Richards for powers of consumption. The author recounts Lowe’s musical evolution from “beat group” to pub rock, the latter of which was a more energetic answer to America’s singer/songwriter wave of the early 1970s, born with the rise of bands like Kippington Lodge, which, though they “simply lacked teen appeal,” put Lowe at center stage as singer, songwriter, and bassist. An encounter with fellow musician Brinsley Schwarz sealed the deal. Their live debut was unimpressive, writes Birch, opening for Van Morrison; watching him onstage, Lowe recalls, “I had a mounting sense of dread that we’d made a terrible mistake.” They got better, launching a musical movement that fed directly into the punk ethos of a few years later. After Costello recorded his “(What’s So Funny About) Peace, Love, and Understanding,” Lowe came under increasing demand as a songwriter, boasting that he could write for anyone—the Clash, the Jam, Tin Pan Alley; he also began to produce while playing live with Dave Edmunds, Carlene Carter, Ry Cooder, and others. The question, asked and answered, as to why Lowe isn’t more famous is a little obvious; there are and have always been many journeymen musicians who provide rock-solid support without ever making the headlines. But though he tends to be a touch worshipful, Birch makes clear that Lowe’s contributions to pop music have been many and mighty—and certainly worthy of celebration with a biography.
Since you put me down, it seems i've been very gloomy. You may laugh but pretty girls look right through me.
Top

Nick and Will discuss Cruel to Be Kind and Nick's long and storied career on September 10, 2019 in New York:
https://www.strandbooks.com/event/nick-lowe-will-birch
Since you put me down, it seems i've been very gloomy. You may laugh but pretty girls look right through me.
Top

A few of us went to see Nick at Shepherds Bush Empire on 20th June. It was a fabulous venue with great sound. Nick told some great jokes and played a fantastic set. No matter what other gigs I see this year, this will be in the top ones. But it struck me as criminal that the venue was only about 75% filled at most.

He's written some beautiful songs and deserves to be recognised as one of the best songwriters this country has ever produced.
It’s such a shame you had to break the heart you could have counted on
Top

Standing room only on the first balcony VG. The crowd up there were probably people who didn't want to stand.

I forgot to mention Will Birch was in the bar upstairs and he was also had the Bruce Thomas/ Derek Philpott signing a few of us went to. The bar was quite star studded we were sitting beside jane Horrocks. John Inverdale and Robert Elms were also there
Top

I saw Nick Lowe at Milton Keynes two weeks ago. Great show in a smallish venue, around 500 there?

I lingered around afterwards and managed to have a chat with Nick. Lovely bloke, very chatty and happy to sign my American Squirm single and Live Stiffs album, both of which had been signed previously by Elvis.

No Alison on the setlist, which he apologised for!

Nick said when he introduced Alison that he did not know a single person in the world that disliked the song.
It’s such a shame you had to break the heart you could have counted on
Top

https://bestclassicbands.com/nick-lowe- ... y-8-15-19/
Since you put me down, it seems i've been very gloomy. You may laugh but pretty girls look right through me.
Top

My copy of the book is due in soon at the local bookshop I like to support. Bigger shops have it & I was interested to see this in the title pages .

He used to be a regular poster on the forum. He hasn't posted since 2017. The email address he linked to the forum no longer works. I wonder if he knows about this.
Top

laughingcrow was a great poster. I miss him.

He was one of the forum members I really wanted to meet.
It’s such a shame you had to break the heart you could have counted on
Top

Offshoreram wrote:He did say he had no definite plans to work with Elvis again but they are in touch regularly and always say they should do something together

It would be so great if Elvis & Nick made a quick record together and maybe did a tour.
Top

At the risk of hijacking this thread, I guess these things are said all the time eg Elvis and Bon Jovi wanting to work together.
It’s such a shame you had to break the heart you could have counted on
Top

The source of the quote from Laughingcrow -

Nick Lowe's new live album (apparently available only as a download) includes his version of "Alison."

Users browsing this forum: No registered users and 35 guests