What a great day with my friends at @sesamestreet #Sesame50 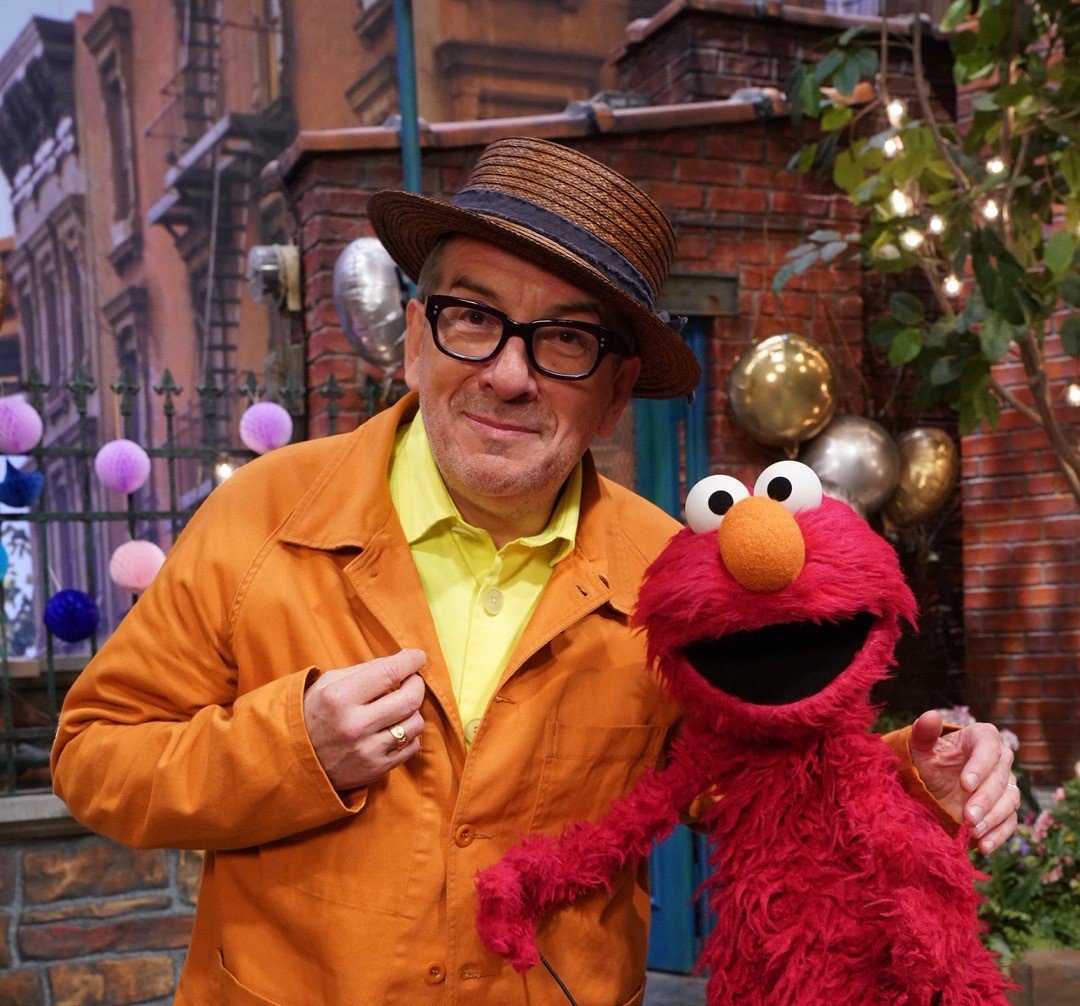 Sunny days on Sesame Street with our friend @ElvisCostello! #Sesame50 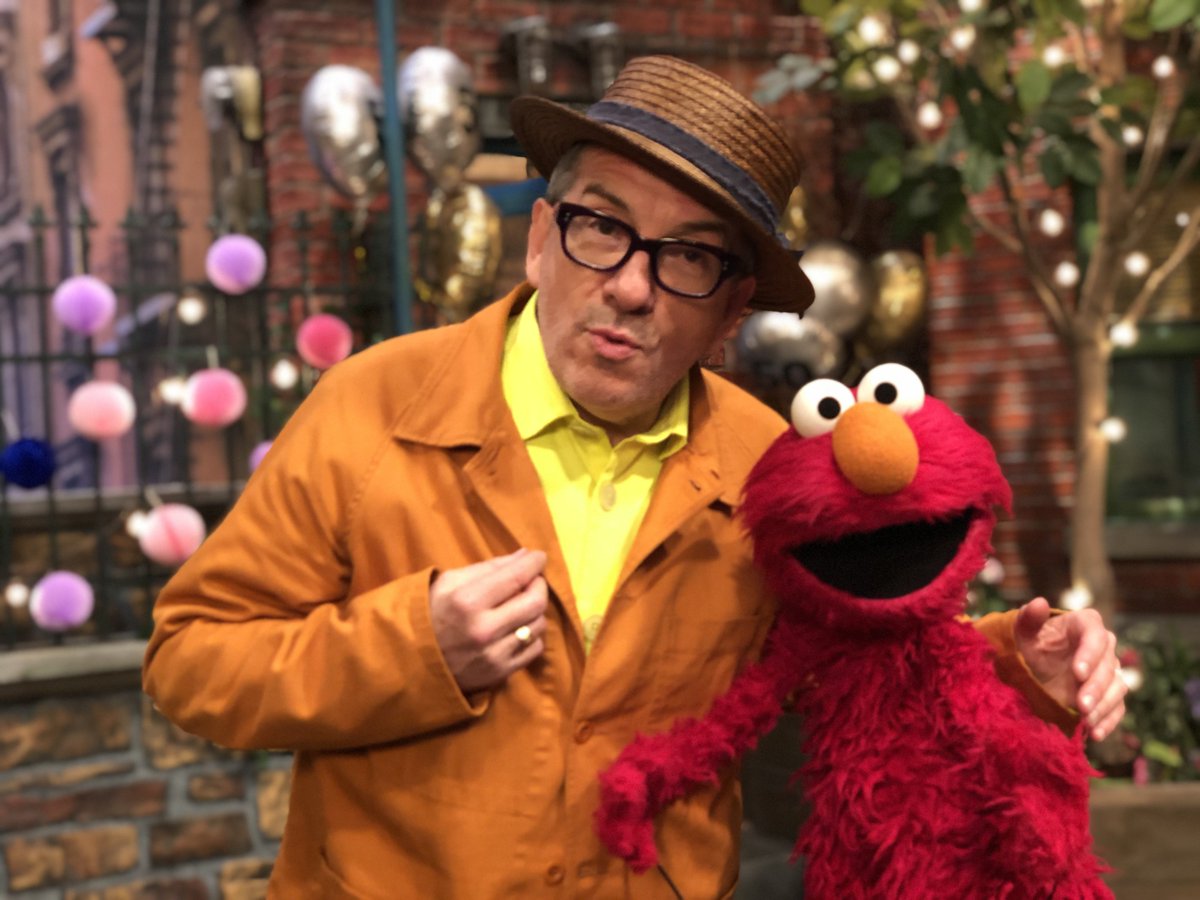 Re: Elvis to guest star on Sesame Street again?

i must say that elvis' fashion sense w. elmo is near perfect! jacket matches nose. shirt is what elmo needs to become jacket colour. quite metaphysical!
Top

do we know if he sang there again? my wife's cousin works there....must press him to find out just what was done.
Top

looks to be singing in the second pic
Top

(October 16, 2019 – New York, NY) – Sesame Street got its start at the height of the civil rights movement and the war on poverty, in answer to a simple but powerful question: could television help prepare less advantaged children for school? In 1969, the show’s founders tapped researchers, entertainers, and other visionaries to create a “street” like no other, where colorful monsters, humans, and even grouches lived side by side. Today, Sesame Workshop – the nonprofit organization behind the iconic show, which has grown to reach kids and families in more than 150 countries and 70 languages – is proud to announce the start of Sesame Street’s landmark 50th season.

The first regular episode of the 50th season premieres on Saturday, November 16 on HBO. This season’s celebrity guests include: Chrissy Teigen; musicians Charlie Puth, Dave Grohl, and Maren Morris; ballet dancer Misty Copeland; comedian Michael Che; and Olympic athlete Chloe Kim. The season also introduces “Big Bird’s Road Trip,” a special segment that tours the United States and beyond to find out what kids love about where they live. In each installment, Big Bird meets new friends – in person or via video chat – and learns all about their families, interests, and neighborhoods. (Nine of these segments were filmed on location during this summer’s “Sesame Street Road Trip.”)

“As we mark our 50th season, we want to remind families everywhere of the timeless lessons Sesame Street has always taught,” said Steve Youngwood, President of Media & Education and Chief Operating Officer of Sesame Workshop. “Everyone, no matter where they are from, is equally deserving of respect, opportunity, and joy.”

Later in the season, a new neighbor will come to Sesame Street. Played by Violet Tinnirello, 8-year-old Charlotte – her friends call her “Charlie” – is the first child to join the Sesame Street cast in more than 20 years. Charlie is a military child who moves to the neighborhood with her family, bringing viewers along for the ride as she explores her new home for the first time.

“We can’t wait to share this season with families and fans of all ages,” said Ben Lehmann, Executive Producer of Sesame Street. “Even as we take time to look back and honor our history, we keep innovating to bring today’s preschool kids something that’s tailored just for them – holding on to all the fundamentals that make Sesame Street so magical.”

Season 50’s curriculum focus – “Oops and Aha!: Embracing the Power of Possibilities” –addresses a pervasive issue facing young children. “Today’s preschool kids are under an unprecedented amount of stress and pressure to meet certain academic and social-emotional benchmarks, often before they’re developmentally ready,” said Dr. Rosemarie Truglio, Sesame Workshop’s Senior Vice President, Curriculum and Content. “That result-oriented mindset can make kids afraid to take even the safest risks – never trying to pour their own milk for fear of spilling it.” Fortunately, caring adults can help relieve that pressure by giving kids room to make mistakes and tools to persevere afterwards. In one episode, for example, Abby Cadabby’s brother Rudy feels upset when he “ruins” a drawing; Alan encourages him to keep trying, and Rudy eventually creates a new picture inspired by his mistake. By modeling positive thinking, self-confidence, and perseverance, this season offers children – and parents! – a fun way to practice essential self-regulation strategies and creative thinking skills.

Throughout 2019, Sesame Workshop has marked Sesame Street’s cultural and philanthropic impact through the decades with celebrations for fans and important new work. The nonprofit organization brought community events to ten US cities in a summertime “road trip,” published a signature research report about how identity impacts children, debuted a host of fashion and lifestyle collaborations for all ages, and expanded the Sesame Street in Communities initiative to help families coping with foster care and parental addiction. Earlier this year, Sesame Street received an institutional Peabody Award and a twelfth Primetime Emmy Award, bringing the show’s total number of Emmys to 193. In December 2019, Sesame Street will become the first television show to receive a Kennedy Center Honor in the history of the award.

Sesame Street content continues to be available to PBS KIDS viewers daily on local PBS stations, the PBS KIDS 24/7 channel, and anytime via the free PBS KIDS Video app. Funding for Sesame Street on PBS is provided in part by Beaches Resorts, Blue Lizard, Chrysler Pacifica, and SeaWorld Parks & Entertainment. Funding for Sesame Street’s 50th Anniversary Celebration on PBS is provided in part by Chrysler Pacifica and Macy’s. Starting next year with Season 51, episodes of Sesame Street will debut on forthcoming streaming service HBO Max before airing on PBS KIDS.
Since you put me down, it seems i've been very gloomy. You may laugh but pretty girls look right through me.
Top

Speaking of which, I've always thought someone should do a mash-up of the Sesame Street theme tune and Tokyo Storm Warning.
Top

Who on earth is tapping at the window?
Top

emotional_fascism076 wrote:I just listened to Tokyo Storm Warning and I hear the Sesame Street theme in there

With Tokyo Storm Warning, I always hear "Auntie Grizelda" by The Monkees

https://youtu.be/3qQKfkDjAR4
Since you put me down, it seems i've been very gloomy. You may laugh but pretty girls look right through me.
Top

EC sings a duet with Kermit on "It's Not Easy Being Green" and sings a couple of lines of "Put Down the Duckie."

Despite the two photos posted above, EC does not appear with his old pal Elmo in the show as broadcast.
Top

I checked YouTube but nothing shows up for this. I'm hoping it turns up.
Who on earth is tapping at the window?
Top

And here it is (a little out of sync or bad miming?)