I am going to be in the area( San Diego) so may try to go, looks like its a standing show, can't remember when I last went to an all standing show since I missed Brooklyn Steel.
Top

So far they've played This Year's Girl, Honey Are You Straight, and Radio Radio.
Top

Elvis worked his way thru the challenges playing acoustic guitar for a while. Really enjoyed my first standing show in a while. My only sound problem being audience members / gits who talked incessantly. Go to a bar not a show. Some audience members clearly not up to data on current Elvis," who are this new band" and not believing my explanation of only 1 new member.
Top

Where were you standing, supplydavid? I was close to the stage and pleasantly surprised by how good the audience was! It's easy to imagine the crowd growing restless given the circumstances and EC ending the show early, but from my viewpoint the audience remained patient and respectful and EC seemed in a good mood throughout.

The sound problem was that EC's guitar kept cutting out on the opening songs. Even after the break to fix it, the problem kept returning. EC tried some songs without guitar ("Accidents Will Happen," "Photographs Can Lie," "Tears Before Bedtime" or on acoustic ("Mystery Dance," "Why Won't Heaven Help Me," "Motel Matches"). He started "Deep Dark Truthful Mirror" on guitar, then stopped playing it, then briefly tried joining Steve at the keyboards. Eventually they settled on plugging EC's guitar directly into a Vox amp (bypassing his usual effects), and that seemed to end the technical difficulties.

Toward the end of the show an audience member fainted as EC was introducing "He's Given Me Things." EC stopped to make sure the man was all right and even invited him onstage (which the man declined). When the same audience member fainted a second time during the song, EC paused to call for a medic and seemed a bit lost when he tried to resume the song.

Okay, great that it seemed to resolve enough to get the entire show ANCT. Appears a fine set including much of Look Now too. Hope your next show gets you the couple other from the new one and naturally a better sounding guitar. Understandably, he can get perturbed when the guitar does not do what he expects. Glad that it sounds like at least he did not get upset about it. Best, ba
Top

The man is a pro.
Top

WTF is going on with the recurring sound issues on this tour???
Top

Exactly - particularly as the sets are so varied.

Elvis is a pro (there’s no doubt about that). He copes really well with unexpected situations.

But these sound issues are no doubt causing concern.
Love is the one thing we can save
Top

Elvis Costello is playing LA: Here are 3 takeaways from his Anaheim concert

Elvis Costello is a musical genius but also a mortal man subject to the vagaries of health and the occasional malfunctioning guitar.

And after more than 40 years in the spotlight, he’s still unstoppable. A total pro, Costello proved at the House of Blues in Anaheim on Wednesday that an imperfection or two, when combined with the strength and beauty of his music, can make a strong night of music even more powerful.

Costello’s just-released “Now Look” is his first album of new material in five years, his first with his longtime band the Imposters in a decade, and his 30th studio record in 41 years. He’s been remarkably prolific, which you can sometimes take for granted, but were reminded earlier this year you really shouldn’t when he suddenly canceled a run of overseas shows after treatment for what was described as an aggressive but treatable form of cancer.

It was a relief then to see him on stage in Anaheim, with a second show at the Wiltern Theatre in Los Angeles on Thursday, seeming fit as ever. When a fan shouted out a question about his health it was clear his sense of humor has recovered, too.

“I’m feeling just fine,” Costello replied with a grin and a nod at his band. “They’re just being nice to me because they think I might die.”

Knock on wood that doesn’t happen for years, because at 64 he’s got the energy of a much younger musician, playing 28 songs over two-and-a-half hours to the delight of an audience that filled most of the venue. Even the technical glitches, “the gremlins,” as Costello called them, that plagued his guitar rig early in the show didn’t dampen fans’ enthusiasm and might have actually produced a more hits-laden set – more on that in a moment.

The current tour is titled Look Now and Then, which the setlist reflected, featuring seven of 12 tracks on the new record, 14 from his first four albums released between 1977 and 1980, and seven cherry-picked from records in between. A few more impressions of the night included:

The ‘Now Look’ material is strong: Costello had talked in the past about not seeing the sense in the traditional practices of the music industry, particularly recording albums in the age of downloads and streams. His last record, “Wise Up Ghost,” from which “Sugar Won’t Work” was performed on Wednesday, was a collaboration with the Roots, and before that you have to go back to 2010 and “National Ransom.”

These new songs benefit from not being entirely new, some of them having been around in unfinished form for a few years, ideas for a musical theater project, including a few collaborations with Costello’s heroes and role models such as Carole King and Burt Bacharach.

“Photographs Can Lie,” the first of the new tunes to surface on Wednesday, is one of three co-writes with Bacharach, who did a full album, “Painted From Memory,” with Costello a few decades ago. It’s a slinky pop number on which Costello’s longtime keyboardist Steve Nieve played a lovely piano. “Burnt Sugar is Bitter,” the collaboration with King, had an uptown feel reminiscent of the Brill Building era from which she emerged and Costello has long adored.

Many of these new numbers are written from the point of view of different female protagonists, allowing Costello the chance to introduce the characters and settings in numbers such as “Don’t Look Now” and “He’s Given Me Things,” both played in the encore, both about the same actress at stages in her life. And while a bunch of these would be perfect for the Elvis Costello musical that someone needs to produce, others, such as “Mr. & Mrs. Hush,” rocked like vintage Costello.

The classics are so great: “This Year’s Girl” opened the show and “Radio Radio” came two songs later, both of them tracks from Costello’s second album “This Year’s Model.” After leaving the stage three songs in so his crew could figure out why his guitar kept cutting in and out, he returned for a stripped-down version of “Accidents Will Happen” sung mostly with just Nieve’s beautiful piano work, and then “Green Shirt,” both of those from the third record “Armed Forces.”

When the guitar issues resurfaced soon after, Costello switched to acoustic to blaze through “Mystery Dance” from his 1977 debut “My Aim Is True.” As more early hits piled up, it sort of seemed like he might be focusing on more of the earlier basic rock and roll tracks which didn’t need anything more than what he eventually ended up with: a microphone placed in front a single Vox amp, no pedals, no boards, no effects. Whatever the reason, he and the Imposters were never a song or two removed from something that somebody loved: “Watching The Detectives,” done with all the ominous feel that song and the green stage lighting delivers, “Alison,” done in a beautifully bare-bones arrangement, “High Fidelity” and “Moods for Moderns,” a pair of pell-mell old-school soul or R&B-styled tracks off “Get Happy!!”

The Imposters are a terrific band: Costello’s original band, the Attractions, is the classic lineup, but when Costello and bassist Bruce Thomas had a falling out in the mid-90s he kept Attractions’ keyboard player Steve Nieve and drummer Pete Thomas and added bassist Davey Faragher to form the Imposters. For his 2017 tour to play nearly all of his 1982 album “Imperial Bedroom,” the band added two backing vocalists, Kitten Kuroi and Briana Lee, and they’re still in the band, adding lovely vocals to the more vintage pop sounds of the new material.

It’s clear that 40 years of Costello, Nieve and Thomas playing together has created a musical connection that serves songs old and new beautifully. When Costello momentarily lost his way during “He’s Given Me Things” – it’s probably the most challenging vocal on the new record and a fan had a medical emergency midway through it that caused Costello to pause in concern – he and Nieve exchanged a few glances and found their way back to the number.

(“What’s So Funny ’bout) Peace, Love and Understanding” wrapped up the show as it traditionally does, and for the final bows you really felt the unity these six musicians enjoy each night. 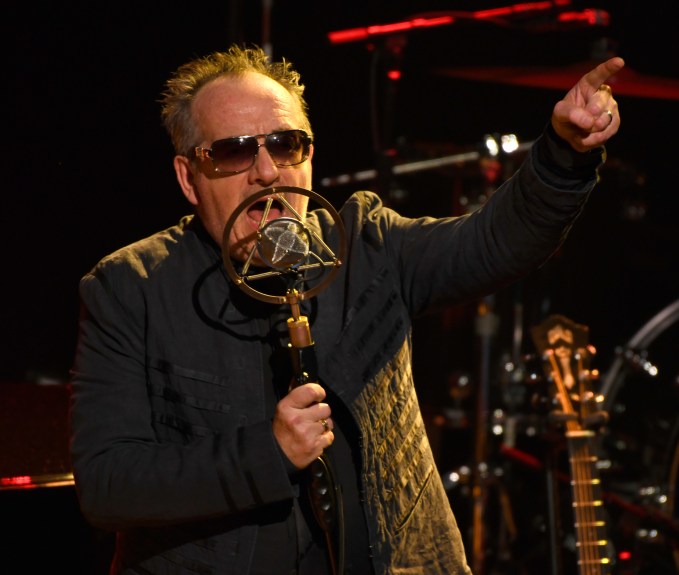 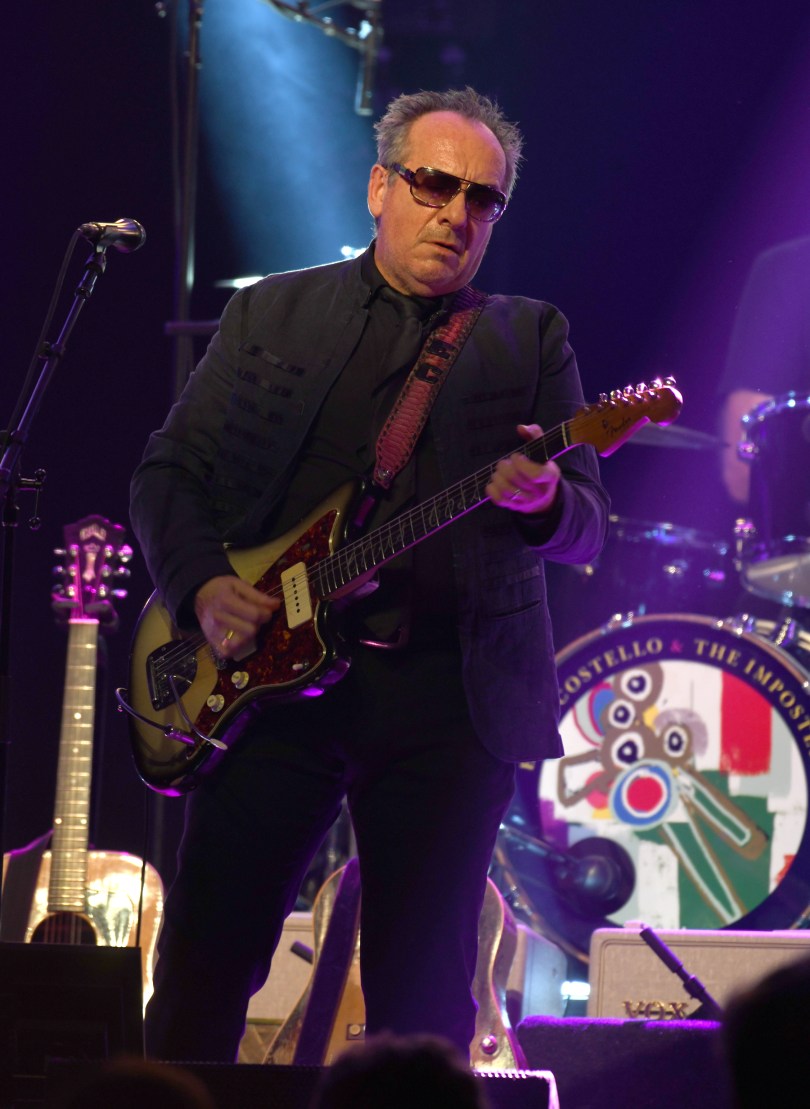 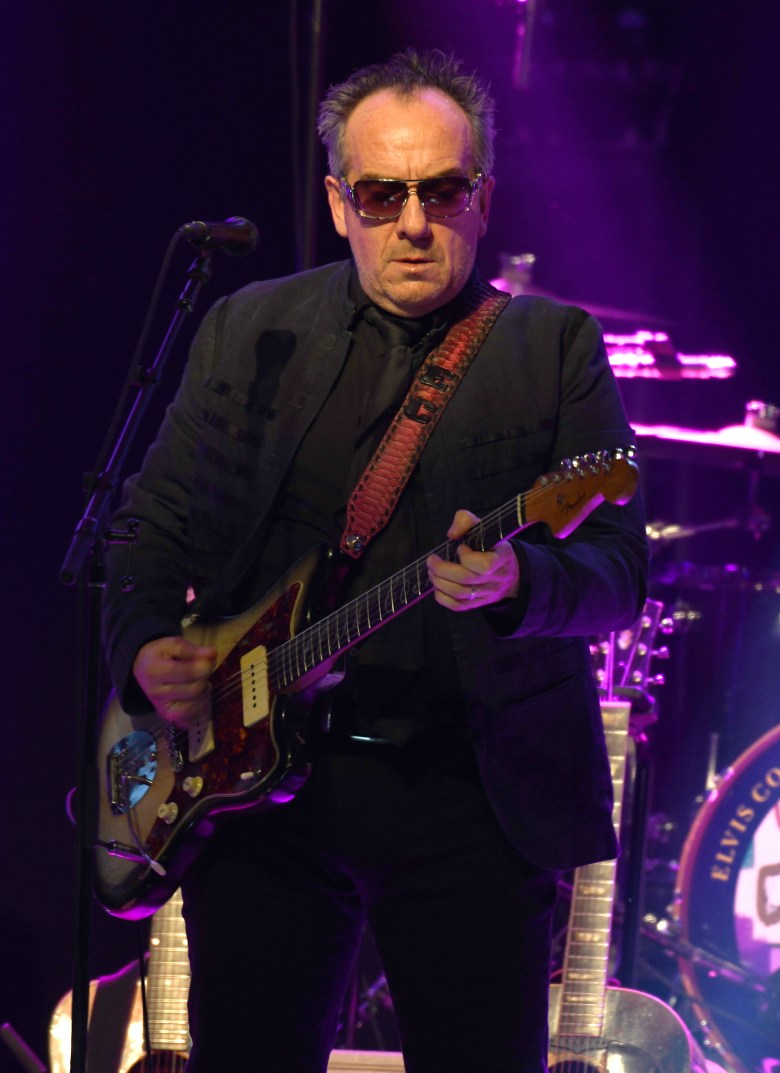 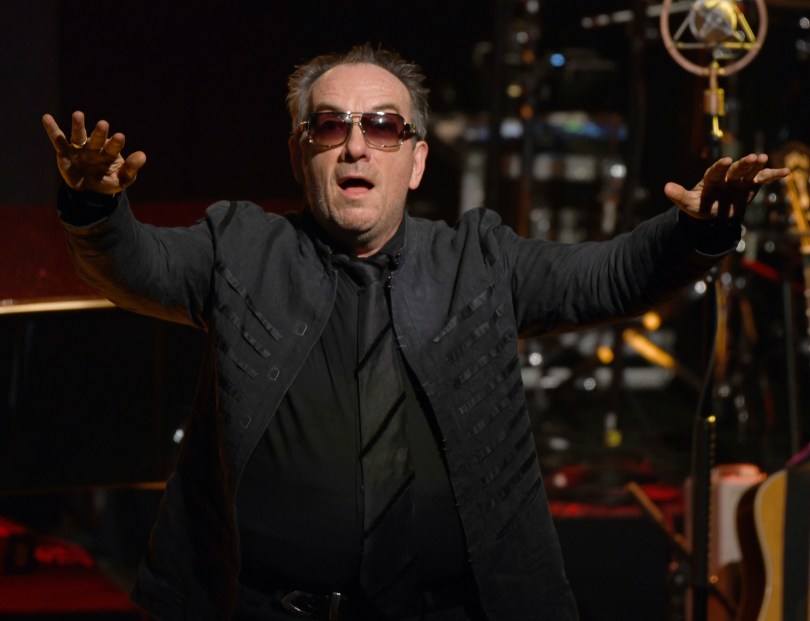 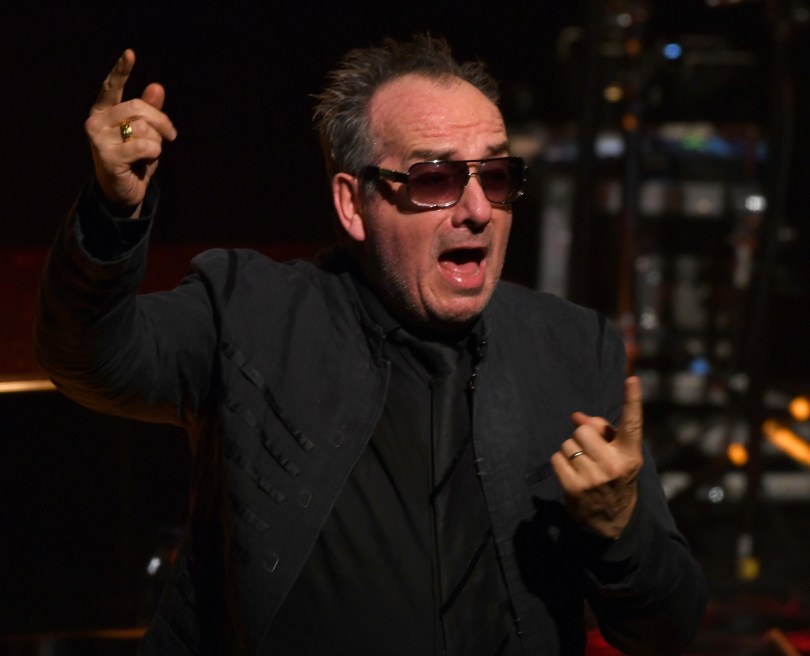 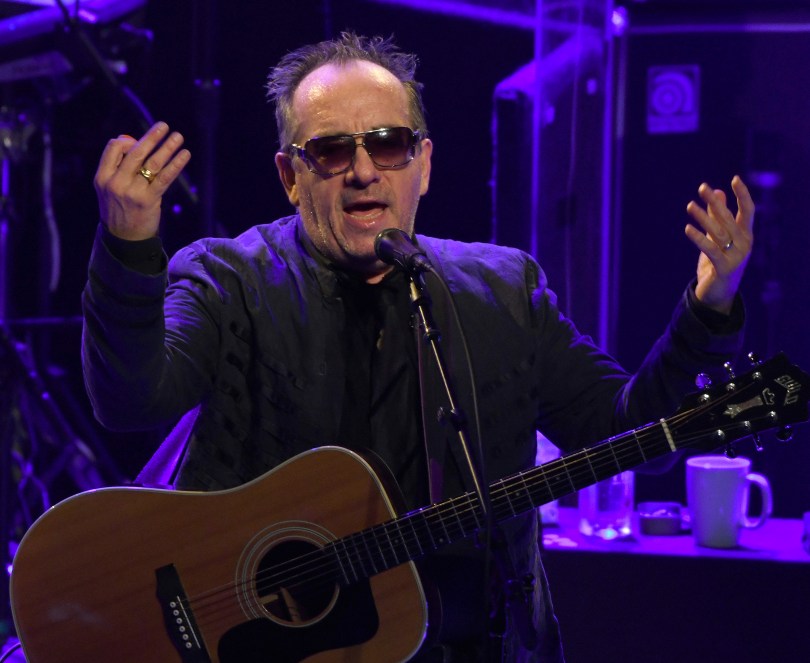 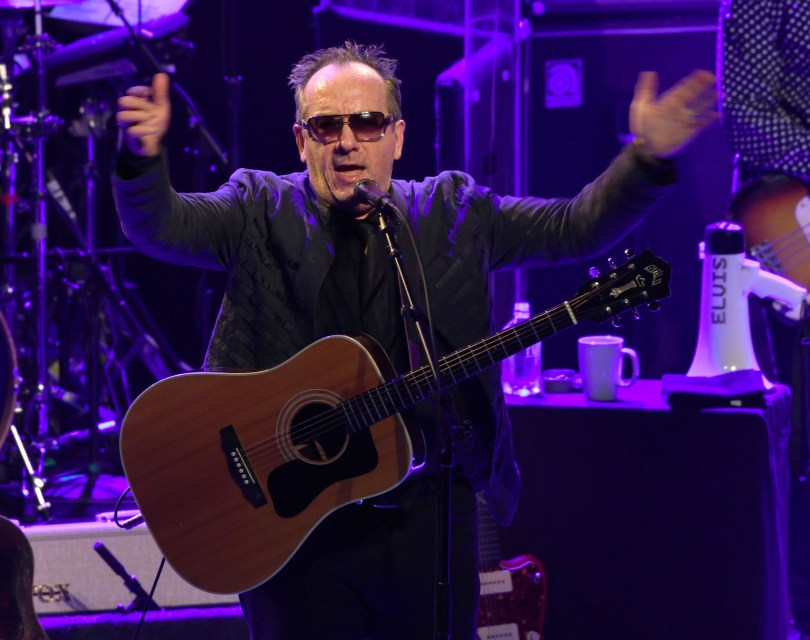 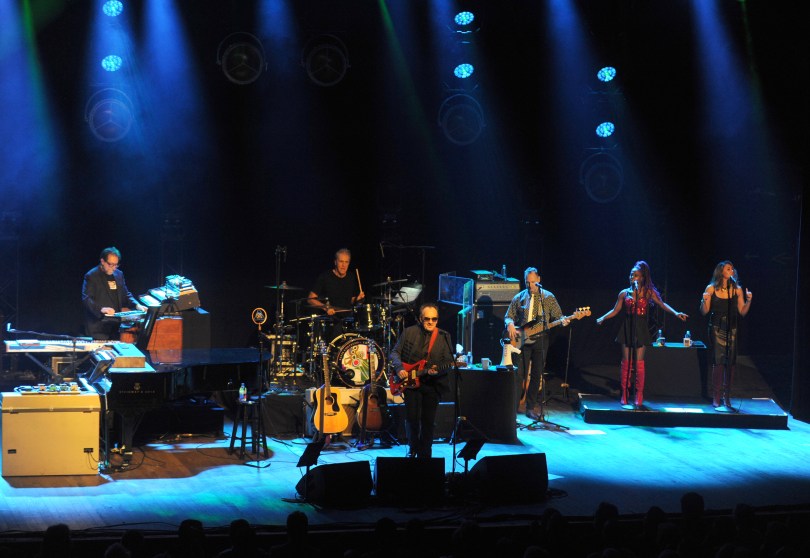 Elvis Costello sits to sing to a unwell fan at stage front Photo by Michael Waldman, shared with permission
Top

Elvis Costello & the Imposters at House of Blues Anaheim


Last night, Elvis Costello & the Imposters managed to make Anaheim a lot less sterile at the House of Blues, touring in support of Costello’s 30th studio album titled “Look Now,” released last month. Costello, whose finger has been stirring the diverse musical stew since the ’70s, has never been one to repeat himself, making his one of the most diverse musical catalogs influencing everyone from Prince to Radiohead. He has a lot of material to draw from so one can only imagine the difficulty in whittling it down to a 29-song set.

They opened with “This Year’s Girl,” “Honey Are You Straight or Are You Blind” and “Radio Radio,” during which Costello was experiencing some technical difficulties. The band left the stage while a few techs huddled over a monitor for a few minutes until Costello and composer/keyboardist Steve Nieve returned — the perfect opportunity to perform “Accidents Will Happen” from 1979’s “Armed Forces.”

Between songs, Costello was a witty storyteller. And sometimes a cryptic one. He seems to have an ability to weave a tale in front of us and then bring its soundtrack to life with little effort. The band performed “Photographs Can Lie” a Costello/Bacharach number, and then Costello gave a verbal spotlight to his backup singers Kitten Kuroi and Briana Lee ,who carried “Burnt Sugar Is So Bitter” (and many of the songs) with a power to highlight his wordier tracks with a female swagger.

Long-time drummer Pete Thomas and bassist Davey Faragher also made this six-piece feel very simpatico, even with a load of history and well-worn baggage in tow. One of the most noticeable things about the show was the vast majority of fans soaking it in sans cell phone. Call it generational, but these diehards were really watching as Costello changed pace, shifted grooves and kept a tight grip on the short hairs of the public imagination.

Kuroi and Lee joined Costello front and center to bring an amalgam of jazz-funk-soul-gospel-pop energy to “Alison,” “High Fidelity” and “Every Day I Write The Book.” Costello closed the set with “Pump It Up” and finally the Brinsley Schwarz cover of “(What’s So Funny ’bout) Peace, Love and Understanding.”
Top

Wow another show I'd like to hear. I hope that fan was ok.
Who on earth is tapping at the window?
Top
Post Reply
15 posts • Page 1 of 1

Users browsing this forum: No registered users and 80 guests