I plan to be there, a real paper ticket this time. Hope i manage to get one of the records

I'll be there
Top

Looks like I will NOT make it there.
Top

I hope to be there. Seated in the grass, under the trees, in the shade, glass of wine in hand, outside of the dusty venue where I have heard shows many times before. I do not need to see them, physically. Just like years ago when he came through with Emmylou Harris.
"....there's a merry song that starts in 'I' and ends in 'You', as many famous pop songs do....'
Top Costello isn’t the intense spitfire he was in the late seventies, when he led the crop of Angry Young Men who bridged the gap between punk and New Wave. Nor is he the songwriting superhero he was in the eighties, when he could knock out classic albums like “King of America” and “Blood and Chocolate” in the same year, or the restless talent of the nineties, when he jumped from genre to genre, often via collaboration, flirting with classical (“The Juliet Letters,” with the Brodsky Quartet) and sublimely subtle adult pop (“Painted from Memory,” with Burt Bacharach). These days, though, Costello still makes interesting choices (his last record, “Wise Up Ghost,” was a team-up with the Roots), and he’s increasingly sharing the contours of his life with his fans; his last New York engagements included a large-screen display that projected family photos, scribbled notes, and other personal ephemera.

With the bad sound review of Pittsburgh and Elvis talk today of lengthy soundchecks to insure maximum quality, I would highly recommend you getting to Summerstage early today. Open air free sound check could get you four hours of EC in nyc today. Enjoy for me too all. ba
Top

Half hour into nyc soundcheck so far. Me, i am home but as per doc reporting to me.....

THE LOVED ONES
.....AND IN EVERY HOME
with LUCY IN THE SKY WITH DIAMONDS
ACCIDENTS WILL HAPPEN
CLUBLAND
TEARS BEFORE BEDTIME
MOODS FOR MODERNS
Intro snipet
SHABBY DOLL
HUMAN HANDS
GREEN SHIRT
GO TELL YOUR QUIET SISTER
WATCHING THE DETECTIVES
THE LONG HONEYMOON

Excellent night in Central Park. Perfect weather. I was right up front in the GA section, leaning on the rail, which was a nice place to be. AMAZING sound. This show sounds so much better outdoors! The acoustics were outstanding. None of the muddy, muffled mix that has plagued so many of the shows during both legs of this tour. No setlist surprises as you can see above. The performances were solid. I loved Boy With A Problem and The Lovers That Never Were. The new song, Go Tell (Your Quiet Sister), was fun to hear. Elvis admitted that BWAP deserves to be played more often because it fits thematically so well into this tour's setlist. So I think it will be a staple.
Top 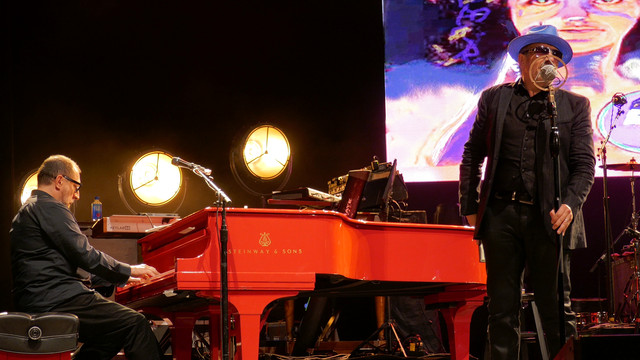 ... lovely at last to hear DPAM playing LITSWD, and GTYQS ...

Took me-others days/years so to do ...
'Sometimes via the senses, mostly in the mind (or pocket)'.
Top

great show and managed to get a copy of the Bright Blue Times ( 1 per customer) but still a few available at the end of the show. Only complaint was it seemed 1/3 of the crowd were more interested in chatting than listening
Top

supplydavid wrote:great show and managed to get a copy of the Bright Blue Times ( 1 per customer) but still a few available at the end of the show. Only complaint was it seemed 1/3 of the crowd were more interested in chatting than listening

Welcome to concerts in the 21st century, otherwise known as short attention span theatre. I'm surprised they weren't looking at their phones and texting each other.
Top

supplydavid wrote:great show and managed to get a copy of the Bright Blue Times ( 1 per customer) but still a few available at the end of the show. Only complaint was it seemed 1/3 of the crowd were more interested in chatting than listening

another main reason i stayed with the grandkids instead last night. always found it the noisiest of places to see him. glad you got the vinyl supply!


Elvis Costello is a writer’s rocker. David Lee Roth put it best when he said, “Music journalists like Elvis Costello because music journalists look like Elvis Costello.” I would take offense to this statement, but after sneaking a glance at myself in the mirror, I think Diamond Dave might be onto something. Costello knows where his strengths are because as a self-proclaimed music nerd (check out his old Sundance show, Spectacle, if you need any more convincing) he can tell when an album or piece of art should be looked upon in reverence. That is precisely why for his current tour with his longtime backing band, the Imposters, he’s playing his 1982 classic, Imperial Bedroom, in full. Upon its release, the LP wasn’t as big of a commercial success as his previous albums, but it was a breakthrough moment for Costello as an artist. Following up the recording of his country-covers album, Almost Blue, in Nashville, Tenn., with famed producer Billy Sherrill, Costello hooked up with Beatles engineer Geoff Emerick to explore the furthest reaches of the pop landscape to create Bedroom, and it’s since remained his most expansive and rewarding record. The tour rolled into town Thursday night for a packed show at Central Park’s SummerStage.

With no opening act, Elvis Costello & the Imposters began promptly at 7:30 p.m. as fans were still making their way into the venue from a line that zigzagged through the park. The band immediately dove headfirst into a ripping version of “The Loved Ones” and from then on we were given a tour of Bedroom with few detours in between. The projection lit up behind them took each of Costello’s album covers and obscured them with art in the style of Barney Bubbles’ artwork for Imperial Bedroom. At one point Costello explained the original abstract work by saying that he told Bubbles to listen to the album and just paint what he felt the overall theme of the record was. After listening, the artist then produced the piece he titled “Snake Charmer and Reclining Octopus” to which Costello thought, “Fuck me, what did we make?” The show was filled with hilarious banter from Costello, and his band was as sharp as their leader’s deadly wit. With original Attractions members Steve Nieve on keys and the incredible Pete Thomas on drums, the band was rounded out with Davey Faragher on bass and Kitten Kuroi and Briana Lee on backup vocals.

It was a great to see them include obscure Imperial Bedroom songs like “Green Shirt” and “Human Hands,” which would normally be left off of the set list. Costello clearly loved this trip down memory lane as he dug deep into an extended guitar solo during the album’s climactic “Beyond Belief” that launched the caustic track into pandemonium. They did find the time to dig out classics from other albums like “Accidents Will Happen,” “Clubland” and a raucous version of “Watching the Detectives,” which had Costello creating piercing feedback through his guitar with a megaphone siren that soared out of control and into the New York City sky. The main set ended with the Bedroom Highlight “Pidgen English” before the band left and returned for an encore. More like a second set, Costello treated the audience to 12 more songs that not only finished his obligation to play Imperial Bedroom in its entirety but also treated his fans to some of the hits they had been craving. For the first song, he yelled, “Now for the original heartbreak song!” before launching into the My Aim Is True classic “Alison” with his two backing singers providing sweet harmonies to its chorus. After running through some more tunes, including the Imperial Bedroom standout “Man Out of Time,” Costello treated the audience to a brand-new number called “American Mirror.” He described it as a plea for a return to decency that could be called “British Mirror” or “Russian Mirror.” They ended the night out with a one-two punch of “Pump It Up” and his version of Nick Lowe’s timeless anthem, “(What’s So Funny ’Bout) Peace Love and Understanding” that seemed as meaningful and prevalent as ever. After Costello and his band bid goodnight, the crowd flooded into the city streets, mesmerized by one of today’s greatest living showmen and songwriters. —Patrick King | @MrPatKing
Top

Meanwhile, across the river in New Jersey, I got a chance to see Nick Lowe perform the very same evening. A wonderful, intimate show, with great acoustics. At one point someone shouted out something about Elvis Costello and Nick responded, in mock horror: "Oh, that loser! Why would anyone want to talk about him?"

Got a good laugh from the audience. He closed the evening with a cover of Alison, and the crowd was rapt.

If you get the chance, do see old Nick. He has a valise full of great songs and a fantastic stage presence.
Who put these fingerprints on my imagination?
Top

Went to nick too Harry, and agree about the good show

jmm wrote:Went to nick to Harry, and agree about the good show

Plus no one was talking as he played either!!

went Friday to Nick in Tarrytown and think i picked the right one of the two shows also. never thought i'd miss EC show so peacefully.
Top

Users browsing this forum: No registered users and 28 guests