Anyone logging the setlist?
Top 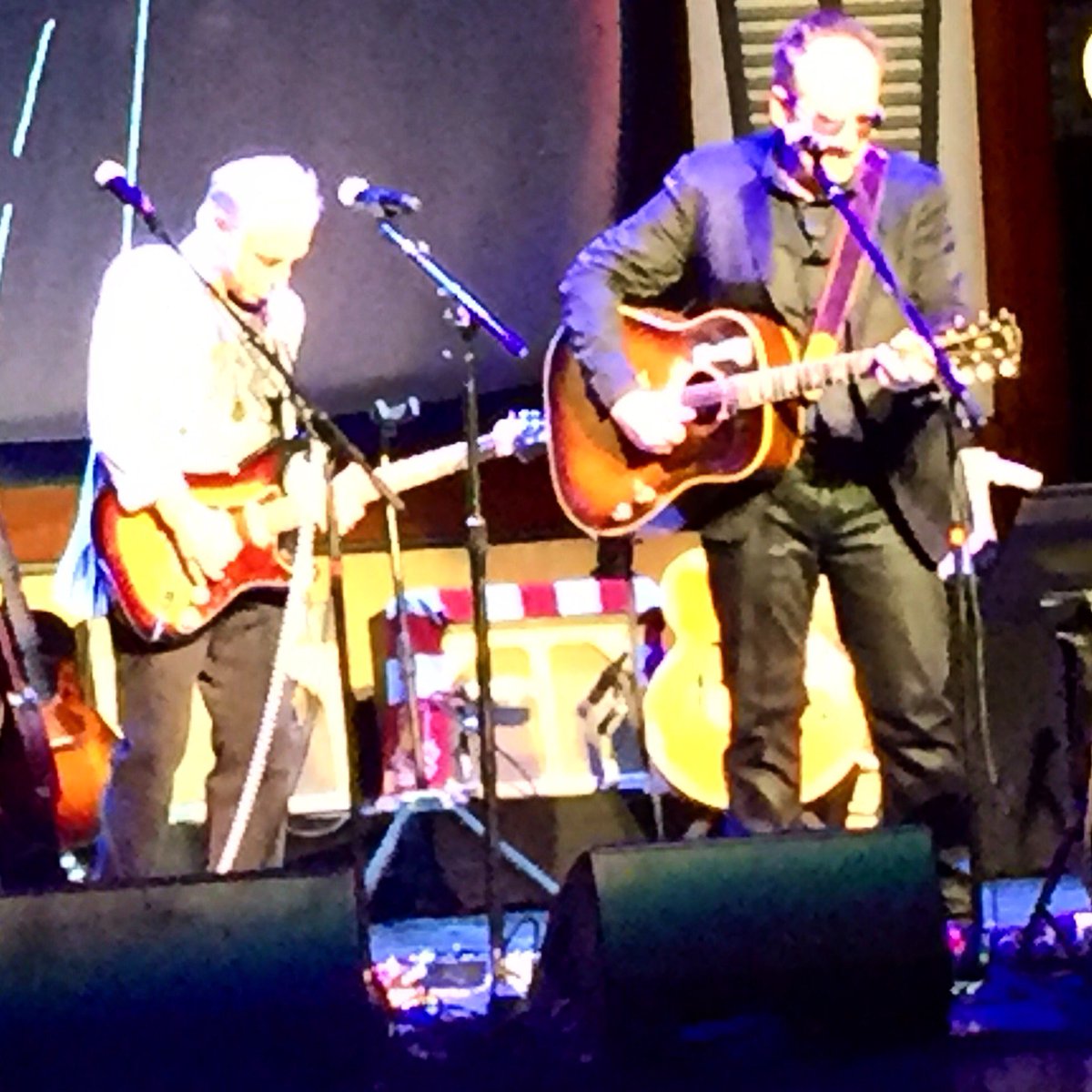 "What's so funny about Peace, Love and Understanding?" Indeed. Where are the strong, who are the trusted? 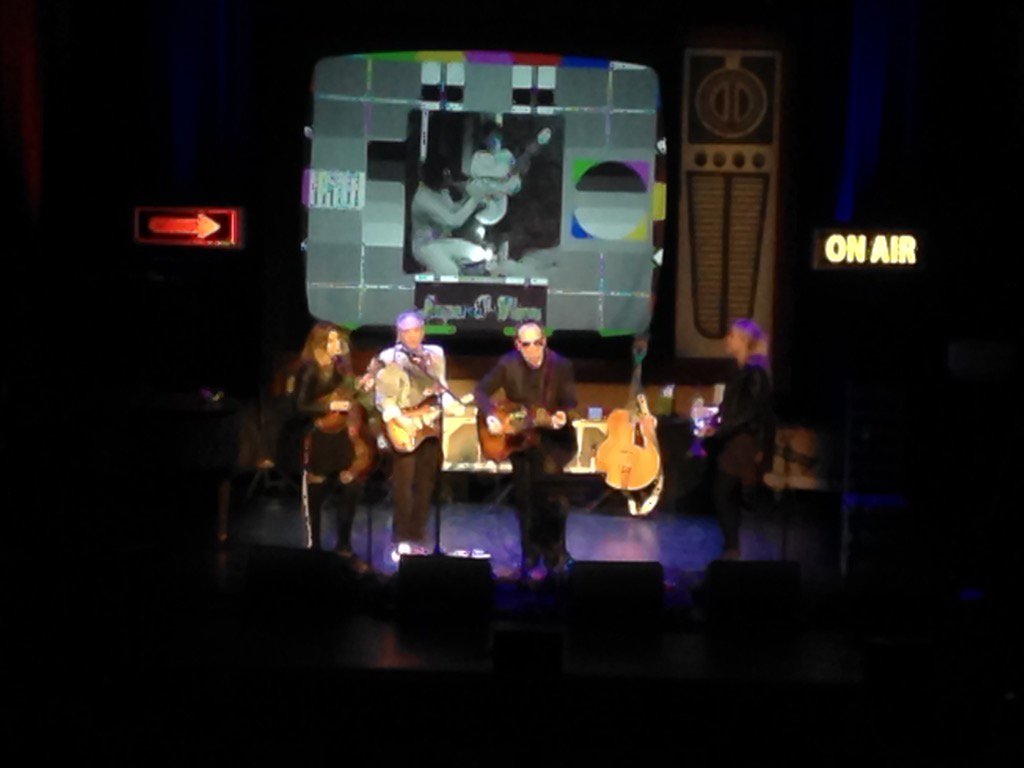 PLU (with Nils Lofgren): https://www.youtube.com/watch?v=4CMDTZxqhTw
Since you put me down, it seems i've been very gloomy. You may laugh but pretty girls look right through me.
Top

Elvis Costello has always been uncommonly well suited to staging the type of performance that made up the bulk of his Friday night concert at Mesa Arts Center.

By the time he brought the encore to a spirited finale with the timelier-than-ever “(What’s So Funny ‘Bout) Peace, Love, and Understanding,” he’d been joined by guitarist Nils Lofgren of the E Street Band and the roots-rocking duo who opened the show, Larkin Poe.

But for the most part, Detour, as the show was billed, featured Costello alone on assorted guitars and piano singing songs and telling stories that were frequently hilarious but also deeply moving on occasion.

It’s a format that works for a number of reasons. One, he’s clearly got the voice to fill a room (or reach inside your chest and tear your heart out when required). Two, his catalog is rich with songs that lend themselves to that “unplugged” approach, aside from which the man has always had a knack for recasting familiar songs in unexpected lights.

He opened the concert in Mesa, for example, with an eerie, somewhat bluesy take on one of the Attractions’ most explosive moments, “Lipstick Vogue,” which someone did not leave me wanting drums, as the TV screen behind him filled with images of some famous musicians we’ve lost in recent years, from David Bowie and Lou Reed to Allen Toussaint.

But perhaps the main reason Costello is better at this kind of format than any performer I’ve seen is that he’s got the personality to keep you entertained from start to finish. He’s kind of a kook -- with a dry British wit and a well-honed sense of the absurd.

After setting the tone with “Lipstick Vogue” and then following through with a somewhat subdued “Watch Your Step,” he thanked the crowd and told them, “Welcome to the first if not the last night of Detour here in Mesa.”

Then, he set up “Accidents Will Happen” with a story about how the song had been written in Tucson.

“This here is a song I want to sing for you that actually has its origins in Arizona,” he told the crowd, “which is not something one can always say.”

What followed was a lengthy monologue about the “unimaginable luxury” of a local Howard Johnson's he stayed in on his first U.S. tour.

“It put all sorts of bad ideas in my head,” he explained. “And I have to confess, I was a young man and I had strayed from the narrow path because this was back in the days when I was trying to rid the world of alcohol. By drinking it. So I did get myself into some mischief and some scenes I shouldn’t have.”

That mischief included a cab ride from Tucson to Mexico with a female cabbie he was “half in love with.”

“She was very attractive and we had had a sort of wild romance and then decided to go to Mexico in the early morning to dance on tables because that’s what I heard you did," he continued. "The heat had kind of gone out of the night by then. And we started to squabble about what was on the radio.”

He wanted Dyke and the Blazers. She was into “Dark Side of the Moon.” He should have known right then and there it wasn’t meant to be. So he went back to his hotel room and worked on “this guilt-stricken song.”

In keeping with the spirit of the title, he ended up breaking a string on “Accidents Will Happen.” So he stopped and resumed on piano, an interesting touch that wouldn’t have occurred but for the fact that accidents will happen, eventually seguing into a cover of Gene Pitney’s “Twenty Four Hours from Tulsa.”

A heartfelt tribute to the memory of Toussaint, with whom Costello cut one of his better albums of this century, “The River in Reverse,” was followed by “Ascension Day,” a highlight of that album. Then he reached back to “My Aim Is True” for a Townshendesque rendition of “(The Angels Wanna Wear My) Red Shoes” before pouring more soul than most singers could show in a lifetime into "Deep Dark Truthful Mirror.”

He then returned to the piano, saying “I approach this piece of machinery with trepidation,” explaining that he’d borrowed the piano from his wife, Diana Krall, and promised to return it. “So I had to tell her that I wouldn’t be setting fire to it and pushing it into the audience like I usually do.”

Then after a funny story about his brief career in computer work before “My Aim is True” changed everything, he treated the crowd to “A Matter of Time” by Los Lobos, which he followed, while still on piano, with one of the concert’s most powerful moments, a mournful rendition of the anti-war protest song, “Shipbuilding" that felt a bit closer to jazz than the version included on "Punch the Clock."

He dedicated a beautifully done rendition of the jazz standard “Walkin’ My Baby Back Home,” complete with a whistling solo, to “my gal and my young sons who are back home. It’s a Friday night, if I’m not mistaken, and as a consequence, they’re doing what they usually do – they’re playing a few hands of cards and they’re smoking cigars and drinking brandy. We’re bringing ‘em up in the Vaudeville life.”

The singer recently published an autobiography, and much of what he talked about reflected that, including several mentions of his father, Ross MacManus, who sang with the Joe Loss Orchestra.

“You know I would be up here playing for you at all,” Costello said, “if it hadn’t been for the fact that my dad was a singer before me. I think I learned a lot from watching him. He was a radio dance band singer. So he was on TV in the late ‘50s and the early ‘60s and when other kids were waiting for their mum or their dad to come home from the office or the factory, I was around the back of the television set with a screwdriver looking for me daddy.”

It was the concert’s longest monologue, lasting more than eight minutes. But it didn’t feel long, peppered with punchlines as it was. Talking about his father’s career, singing covers, led to a well-aimed swipe at reality-television singing contests. “Just the other night,” Costello said, “they finally drove the dagger through the smarmy heart of ‘American Idol,’ for the last time,” which somehow felt like an extremely fitting introduction to “Ghost Train,” a song he said was inspired by people who had no business in show business.

Nick Lowe’s “When I Write the Book” led into “Everyday I Write the Book” and back again, a crowd-pleasing highlight that was following by another big crowd-pleasing moment, “Watching the Detectives,” on which Costello, an underrated lead guitarist, employed a loop pedal, allowing him to construct a cacophonous wall of guitar parts that sounded a bit like a surf guitarist playing free jazz (or, in layman’s terms, Wilco). It was amazing.

After that, Costello took a short break, changing outfits while screening footage of his father performing “If I Had a Hammer,” a song and dance rendition that probably had to be seen for you to comprehend just how surreal yet wildly entertaining that whole portion was.

When he returned, he was joined by the women of Larkin Poe on a rollicking “Pads, Paws and Claws,” a rockabilly-flavored Paul McCartney co-write; “Love Field,” a bittersweet version that effortlessly topped the studio recording; “Clown Strike”; “That’s Not the Part of Him You’re Leaving” and “Blame It On Cain” in a grittier, bluesier, swampier version than “My Aim is True.”

After that, it was back to Costello alone, who climbed inside the giant TV that had screened that inspiring footage of his father, for a devastating “Alison” and a version of “Pump It Up” that was shockingly raucous considering the lack of anything other than Costello on guitar.

Stepping out of the TV, Costello returned to piano, playing a snippet of “Side By Side,” another jazz standard, before a mournful cover of the Drifters’ “Mexican Divorce” that somehow turned into a medley with Pink Floyd’s “Another Brick in the Wall,” Costello spitting out the lyrics in the voice of “This Year’s Model.”

A monologue about his grandfather, the boy soldier, gave way to a melancholy rendition of “Jimmie Standing in the Rain” which ended in Costello going off mic for a snippet of “Brother Can You Spare a Dime.”

After bringing the set to a spirited climax with “Veronica” and “Less Than Zero,” he announced that he was bringing out a very special guest who had the night off after Bruce Springsteen canceled a concert in North Carolina.

Enter Nils Lofgren, who turned in some gorgeous guitar work on “The Dark End of Street.” Then, the women of Larkin Poe returned for an encore-closing “(What’s So Funny ‘Bout) Peace, Love and Understanding,” a fitting close to an amazing night.

1.Lipstick Vogue
2.Watch Your Step
3.Accidents Will Happen / Twenty-Four Hours From Tulsa (Gene Pitney)
4.Ascension Day
5.(The Angels Wanna Wear My) Red Shoes
6.Deep Dark Truthful Mirror
7.A Matter of Time (Los Lobos)
8.Shipbuilding
9.Walkin’ My Baby Back Home
10.Ghost Train
11.When I Write the Book (Rockpile) / Everyday I Write the Book
12.Watching the Detectives
13.Pads, Paws and Claws
14.Love Field
15.Clown Strike
16.That’s Not the Part of Him You’re Leaving
17.Blame It On Cain
18.Alison
19.Pump It Up
20.Side By Side
21.Mexican Divorce (Drifters) / Another Brick in the Wall (Pink Floyd)
22.Jimmie Standing in the Rain / Brother Can You Spare a Dime?
23.Veronica
24.Less Than Zero
25.The Dark End of the Street
26.(What’s So Funny ‘Bout) Peace, Love, and Understanding
Since you put me down, it seems i've been very gloomy. You may laugh but pretty girls look right through me.
Top

What a fantastic review - thanks.

Interesting about the change of outfit!
It’s such a shame you had to break the heart you could have counted on
Top

This time a year ago it was when Nils Lofgren (who is a really great guy) got up to Play on stage with Elvis and EC insisted we get this picture for Prowsey.... I look a lot like this emoji here