Elvis's schedule is yet again coinciding with Wreckless Eric. Both of them play in Dallas this coming Sunday. After doing the support set for Steely Dan will Elvis have the time or inclination to dash around and see Eric?

Not thrilled it's outdoor...considering a 101 degree forecast.
Top

I will be there. Noiseradio will also be in attendance. Gonna be a furnace, but I'll be into the cold beer.
Now I'm the invisible man, and you can't see me.
Top Elvis Costello, Steely Dan hoped you were happy at Gexa Sunday. If you went, you were.

The pairing -- Elvis Costello and the Imposters opening for Steely Dan (opening!) -- makes sense for reasons it's difficult to articulate. Maybe it's the "jazz" influences, Walter Becker and Donald Fagen's evident from the beginning and Elvis Costello's there from birth (he is, after all, the son of a big-band leader of some renown). Or the expansive songbooks filled with standards, popular hits and deep cuts coveted by devoted cult followings. Or the fact each is so singular they didn't even spawn imitators during their climb of the charts. Or the clockwork professionalism each displays: Clock in by 7, give the people what they want, clock out at 8, next.

Sunday night at the Gexa Energy Pavilion, theirs was the perfect bill, eliciting the broad grin of contented recognition at old friends dusted off, dialed in and turned up. This was Lynyrd Skynrd coming out and doing three hours of "Freebird." Sure, people left disappointed that they didn't hear, oh, "Accidents Will Happen" or "Babylon Sisters." But with an estimable back catalog spread between the two acts, there are bound to be egregious omissions. Otherwise the show would last weeks.

Costello -- who looked as hot as it felt in the sweltering, decrepit Gexa Easy Bake Oven bearing the brunt of the setting sun -- began promptly at 7, with an oldie but goodie whose bit-of-a-dig title might as well be this show's moniker: "I Hope You're Happy Now" (from 1986's Blood & Chocolate, among his best). Then, to 1980's "High Fidelity." And, even further back, to 1978's "(I Don't Want to Go to Chelsea)." All the way to the very beginning: "Watching the Detectives," the first song on the first record.

And each version was as catchy and dead-on as you could hope for -- more than mere echo, but a tangible keepsake from one of rock's best singer-songwriters paying respect to the back catalog after once trying to disavow its existence. Still, despite the occasional surprises ("Man out of Time" from 1982's Imperial Bedroom, among his best) and the inevitable (and perfectly rousing) renditions of "Alison" and "Pump It Up" and "(What's So Funny 'Bout) Peace, Love, and Understanding," Costello doesn't end the history lesson at Way-Way-Back. His set Sunday delivered more recent offerings, among then the pulsating, snarling, sounds-like- '80"Bedlam" from 2004's The Delivery Man and the only-5-years-old country ballad "Jimmie Standing in the Rain," the only song to get a introduction and explanation.

Steely Dan's set -- alas, twice as long as Elvis' -- never got past 1980 and Gaucho and "Hey Nineteen" (which is a song about being "the dandy of Gammi Chi" way back in '67 and might as well be Olden English at this late date). No acknowledgement of the the two records made in the last 15 years. The hits and nothing but. Or, as Fagen said from behind his keyboard: "I think you'll know most of 'em. If you don't, pretend you do." (As if.) Or, as Becker said from behind his rotating assortment of guitars, "It's gonna be a super-duper night."
And, of course, it was: Fagen and Becker were backed by a top-notch big band anchored by drummer Keith Carlock, the University of North Texas graduate, and back-up singers perfectly capable of taking center stage (as they did during "Dirty Work," a highlight). And theirs is a no-lose compendium of choices whose every chorus even the casual fan knows kinda-sorta by heart (good luck getting "Rikki Don't Lose That Number" out of your head for the rest of the day). If anything else sounds better than "Josie" or "Peg" or "Kid Charlemagne" or "Show Biz Kids" played loud and outside in the middle of summer, prove it.
Top 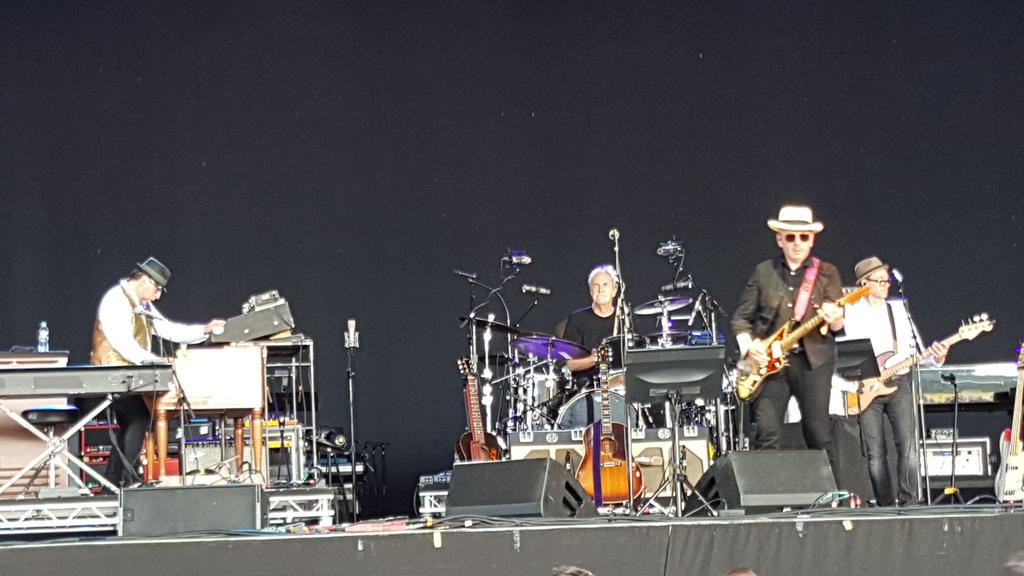 I know I always have!

And Steve doing the Dallas theme -

I know I always have!

And Steve doing the Dallas theme -

The TKO horns also did "Theme from Dallas" during Pump it up in 1983.
Top

People complained about missing Accidents Will Happen or oh "Babylon Sisters".........I know I always have! And Steve doing the Dallas theme - )

There's always one unhappy punter who wants his money back at a solo gig claiming he expected The Attractions !!!
Top


DALLAS When the Steely Dan-Elvis Costello bill was announced, it immediately made sense: Two acts known for literate songwriting, both rooted in the ’70s.

They even each had classic 1977 albums with songs — Peg, Josie, Alison — named after women.

But then you start thinking about the differences: Costello wasn’t really a punk rocker but rode a punk wave to a level of success, and has since had an eclectic, prolific career in which he’s dabbled in all sorts of genres; Steely Dan — really, Donald Fagen and Walter Becker — is known for its studio meticulousness, has only released a couple of albums since 1980 and rides a smooth, jazz-influenced groove that continues to serve Becker and Fagen well.

The contrasts were more marked during their concert Sunday night at Gexa Energy Pavilion, where Costello opened with an hour-long set warming the crowd up for Steely Dan, which clocked in at more than two hours.

Costello was with the Imposters, two of whom — keyboardist Steve Nieve and drummer Pete Thomas — have been with him since 1977 (and bassist Davey Faragher has backed him for more than a decade).

Becker and Fagen, the only permanent members of Steely Dan, were backed by eight other musicians and three background singers, although many in this group are starting to feel permanent themselves.

Steely Dan reeled off years’ worth of hits, although those years were pretty exclusively 1972 through 1980, without coming off like a nostalgia act.

Credit that to the level of talent onstage; besides Fagen’s crackerjack vocals, there were major contributions on guitar from Becker and especially Jon Herington, who is one of the most unassuming-looking people ever to tear through scorching solos; and from drummer and former UNT student Keith Carlock (who combined with Herington for an incendiary Bodhisattva).

The horn section — Jim Pugh on trombone, Michael Leonhart on trumpet, Walt Weiskopf on sax and Roger Rosenberg on baritone sax — got their turns to shine, and the “Danettes” (Paulette McWilliams, Carolyn Leonhart and Cindy Mizelle) got the spotlight for Dirty Work, one of the few Steely Dan numbers not originally sung by Fagen. Becker, who seemed to be in an unusually talkative mood, also took lead on Daddy Don’t Live in That New York City No More, a song from 1975’s Katy Lied.

Aside from that song, the band never strayed too far from the familiar, but there were certain songs — a funked-up Show Biz Kids, Black Friday, Home at Last, even Bodhisattva — that were more surprising than they once would have been, an indication that while the Dan is still a classic-rock staple, some of its songs are starting to slip off those demographic-targeted playlists.

Peg and Josie did get their due, as did Reelin’ in the Years; the musicianship keeps all the songs fresh and they take on new life on stage, and the catalog deserves an extended life on radio.

Costello has tended to struggle at Gexa (or whatever the venue happened to be called at the time); the pavilion often swallows up stripped-down groups such as the back-to-basics Imposters. This was one of his best sets there, with Costello’s voice rich and full even if the sound sometimes made it difficult to make out what he was singing.

His set list was, really, more adventurous than Steely Dan’s, switching from old favorites from his 1977-’82 peak ( High Fidelity, I Don’t Want to Go to Chelsea) to more recent numbers such as Flutter and Wow and Jimmie Standing in the Rain (which concluded with a beautiful bit of a cappella singing by Costello) .

But given the conditions — playing while the sun was still shining, and as some people were still finding their seats, with unfriendly acoustics — maybe adventure wasn’t the way to go.

Songs that had lush production on record (Man Out of Time, Everyday I Write the Book) got a little lost in the cavernousness of Gexa (although Everyday got a big background-vocal boost from the crowd), but the closing trio of Elvis “hits” — Alison, Pump It Up, (What’s So Funny ‘bout) Peace, Love and Understanding — brought the show to an effective climax .

It would’ve been interesting to see Costello to come out for a song or two with Steely Dan; on his Sundance Channel show Spectacle, he regularly played with his guests or traded songs with them.

But taken as a whole, the acts complemented each other, an offbeat appetizer leading to a comforting but tasty and well-executed dish.
Top

It looks like DFW could use an editor.
Top

Users browsing this forum: No registered users and 95 guests